Stand With Ukraine? No Thanks.

Lizard King said:
Yeah in hindsight it was an obvious lie but when 911 happened I started to worry about the Taliban actually invading the US and attacking me for reasons I didn't understand. The thing that freaked me out the most was when they mailed that deadly poison anthrax at the same time. They blew that out of proportion making me think the whole country was going to be poisoned. Then that plane that crashed in Shanksvill was supposed to be headed to Washington DC. At the time I thought how horrible. Now it doesn't seem like such a bad idea. How else can we get rid of those thieving crooks who are robbing and killing us anyway they can . And they all own Pfizer stocks too.
Click to expand...

I know, I remember how on high alert I was always to have a game plane if I became in a situation where there was a suicide bomber.
How different it was to fly also. My husband and I were married a year after 911. Kid you not, we were the ones profiled and patted down, not through security but before we got on the plane for our honeymoon! Not the people that clearly could of been terrorists!
I remember walking around New York city and Washington DC after 911 and scoping things out in case someone started shooting!
And yes our whole government is so corrupt. What lies they told us making us think that the plane was headed to to Washington DC!
And yes all our politicians keep getting rich from Pfizer. Absolute evil.
Well thankful we have these forums to share our info and encourage each other that we are not alone. That people that discover this sight can get useful info and we can spread truth.
Love your posts Lizard King.
And I know we all come from different backgrounds and have different beliefs, but I love that most of us truly care about one another here and glad I found this forum.
M

Lucy said:
i remember also how brainwashed I was after 911. I trusted our government and had voted for Bush. I thought America was doing the right thing....and then I started researching and learning the truth..

My one nephew was stationed in Iraq and another one in Afghanistan. Both have PTSD and the one is severely disabled from an IED exploding under the Humvee he was driving. From visiting him at Walter Reed I saw so many lives destroyed. Young men blind, burned, paralysed, and with loss of limbs.
So many families destroyed when our soldiers started coming back home. Suicides, substance abuse, and complete despair from the horrors of war.
Young men getting out of high school and going and shooting men and watching their friends get blown up in front of them. War is Hell. And all the innocent lives of the innocent men, women, and children of Iraq, Afghanistan, Syria.....
Yes the Bush's are all evil and most are in our government, as well as most now.

So the more I learn the sadder I become. I just told my husband it's true, ignorance is bliss.
But I would rather know truth than be blinded.
Click to expand...

I was horrified by what happened also....probably a better way to sway the people to an agenda with the planes then a dirty bomb you wouldn't have the great theatrics like 9/11 had... an emoji representation of how i felt
L

Such a joke...are we running out of money or not? Mass confusion!

I respect you and your posts and I see why you linked this here. But the more hes listened to, the more obvious it becomes that Dore & co. are completely in the tank for The Powers That Be and that they are controlled opposition/limited hangout operations designed to further the agenda. They are stupid and low-rent/for sale... but they are also dangerous.

TempestOfTempo said:
I respect you and your posts and I see why you linked this here. But the more hes listened to, the more obvious it becomes that Dore & co. are completely in the tank for The Powers That Be and that they are controlled opposition/limited hangout operations designed to further the agenda. They are stupid and low-rent/for sale... but they are also dangerous.
Click to expand...

Once again, only place I could find the video, which is actually a Matt Taibbi joint from his Substack since he no longer works for that birdcage liner Rolling Stone anymore. Went to his Substack but couldn't locate it. Very little commentary from Dore & crew here, mainly the video which DOES illustrate the point of war profiteering, and the reality behing the term "corporate media."

I gots to admit... I never suspected the Rotary Club system of being part of The Powers That Be lol

Rotary club is a tool to collect useful idiots . Who aint fit mentally & physically to be police becomes security guard ,who aint fit for freemasonry becomes a member of rotary club.Another place for rich people to rub elbows together and make shady dealings.

"Zelensky to Schwab and WEF: Ukraine Will Give Regions to Partner Countries, Cities, even Companies, for "Patronage" to Aid in "Rebuilding"

" Somehow Russian hackers hacked the political line for President Bush, used a face overlay to pretend they were Zelensky, and got him to spill the beans, even on the Ukraine biolabs"

I guess now that monkey pox has taken over the news that people no longer thinking about Ukraine. And then shooting bs. Shows how easy they manipulate people and control the narrative. This Ukraine crap should be number one priority for everyone.

Time for some rebranding.If u point out that them azov boys are nazis who got swastikas tattooed on them then you are an russian propagandist. 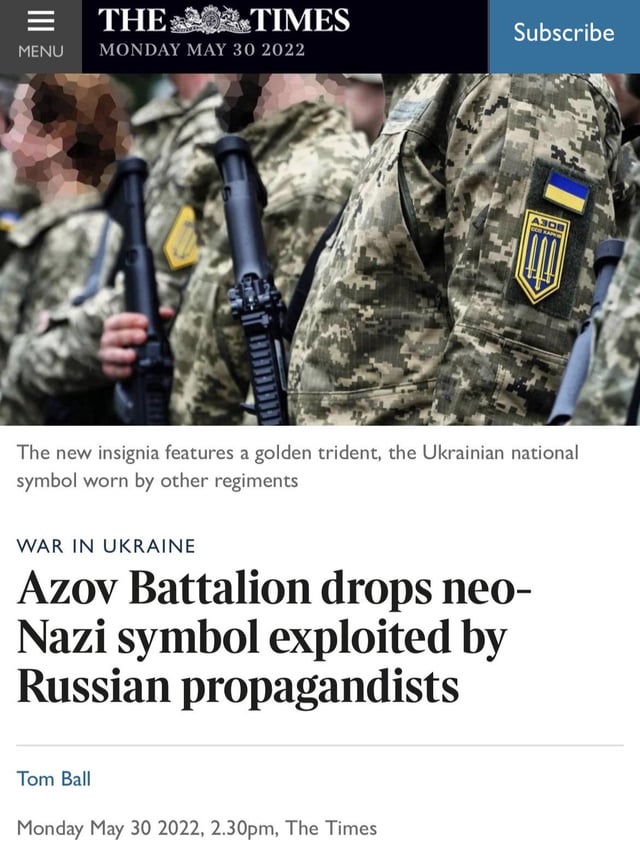 "All wars are about resources"

This could be posted in a number of different threads, as it applies to all manufactured external threats (e.g. the magic virus scam, Russia and China putting their countries so near NATO bases, etc.)

In “Leo Strauss and the American Right,” Shadia Drury wrote, “Strauss, following Machiavelli, maintained that if no external threat exists then one has to be manufactured.”

These Straussian types are less restrained by conventions and more capable of resorting to terror and other criminal measures, “if such measures are effective in accomplishing the desired end.” In Strauss’ case, his view that Machiavellian ends justify the means was married with his conversion to political Zionism. This plague has also been merged with a crackpot Americanism mythos that the U.S. and its bogus kleptocratic “democracy” is the only source for “good” in the world and should be supported or else “evil” will prevail.

These Frankists write books, like Samuel Huntington’s “Clash of Civilizations,” and trot out Thomas Freidman (both Zionists) to propagate these schemes.

And not a day passes now on this planet without humanity battling with this egotist-Luciferian philosophy. Thus describes the dominant mentality of the Crime Syndicate that we write about on these pages.