Who do Muslims really worship?

Seen as though this is takenfrom the mayans...

wiki has this to say about the number 144

Mohammed_123 said:
Seen as though this is takenfrom the mayans...

wiki has this to say about the number 144

Thoth, known to Maya as Kukuklan, emerges from his aircraft–shown as Serpent’s head. When he left Yucatan, Maya show his flying serpent craft swallowed by the night sky, shown as a Jaguar swallowing the flying serpent

Is Kukulkan Mayan or Aztec? 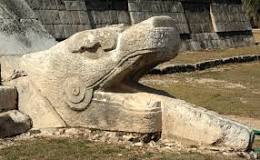 K'uk'ulkan, also spelled Kukulkan, /kuːkʊlˈkɑːn/ ( lit. "Plumed Serpent", "Amazing Serpent") is the name of a Mesoamerican serpent deity that was worshipped by the Yucatec Maya people of the Yucatán Peninsula before the Spanish conquest of Yucatán.

Why did the Mayans flatten their foreheads?


For the Maya, it also held a religious significance. According to Gonzalo Fernandez de Oviedo, a Spanish chronicler of the conquest of the Americas, a Mayan explained: “This is done because our ancestors were told by the gods that if our heads were thus formed we should appear noble …”

I think that the same tradition has carried on with the Muslims, who when saying there prayers they place there forehead on a stone.

Pythagoras, who lived in ancient Greece in the 6th century BCE, is known for his contributions to mathematics, particularly for his theorem about right-angled triangles. However, he is also associated with an alphabet known as the "Pythagorean alphabet."

This alphabet is not widely used in modern days and it is not clear if it was actually developed or used by Pythagoras himself, or if it was developed by his followers or later philosophers.

It is important to note that the idea of assigning numerical values to letters in order to uncover hidden meanings, known as gematria, has been used in other cultures and religions such as Hebrew and Kabbalah.

Isopsephy is a method of assigning numerical values to letters, words, and phrases in order to uncover hidden meanings or relationships. The word "isopsephy" comes from the Greek words "isos," meaning "equal," and "psephos," meaning "pebble" (referring to the practice of counting pebbles or pebble-shaped counters as a form of primitive calculation).

Isopsephy was also used in ancient Greece for divination and in the construction of magic squares. It was also adopted by other cultures and religions such as Hebrew and Kabbalah.

Isopsephy is not widely used in modern times, and it is considered more of a historical and philosophical concept rather than a scientific one. There is no proof that the hidden meanings or relationships discovered through isopsephy have any basis in reality.

Isopsephy can be applied to any alphabet, not just the Greek alphabet. In fact, isopsephy has been used with the English alphabet as well.

In English, isopsephy is sometimes called "gematria" and it works by assigning numerical values to letters of the English alphabet and then adding them up to find the numerical value of a word or phrase. The values assigned to each letter are arbitrary, and different systems may assign different values.

It is important to note that there is no scientific evidence that the hidden meanings or relationships discovered through isopsephy (or gematria) have any basis in reality. It is considered more of a speculative, esoteric or philosophical concept.

The three-moon symbol, also known as a Triple Moon or Triple Goddess symbol, is a symbol that represents the three phases of the moon: waxing, full, and waning. In Wiccan and pagan belief, the Triple Moon symbol represents the three aspects of the goddess: maiden, mother, and crone. The maiden represents new beginnings, youth, and innocence; the mother represents fertility, growth, and creativity; and the crone represents wisdom, experience, and endings. Each phase of the moon is associated with a different aspect of the goddess and her powers.

In Islamic tradition, Samiri is the man who led the Israelites astray during the time of Moses (Musa in Arabic) and Aaron (Harun) in the desert. According to the Quran, Samiri convinced the Israelites to create a golden calf as an idol to worship while Moses was away on Mount Sinai receiving the Ten Commandments. This event is considered as one of the Israelites' major sins in the Quran, and Samiri is held responsible for it. He is also known as the "man of the samsara" because of his role in leading the Israelites to idolatry.

In Islamic tradition, Samiri the magician is a man who was known for his ability to perform magic, he is also known as the "man of the samsara" because of his role in leading the Israelites to idolatry. He is most famously known for his role in convincing the Israelites to create a golden calf as an idol to worship while Moses was away on Mount Sinai receiving the Ten Commandments. This event is considered as one of the Israelites' major sins in the Quran, and Samiri is held responsible for it. He is not mentioned by name in the Quran, but he is referred to as the "man of the samsara" or the "one who cast the calf" in some hadith.

What is samsara in Islam?


Those who die unprepared must be reborn (samsara) to live out the consequences of their past deeds (karma). Grave sins incur a miserable rebirth in hell or an interval in hell en route to rebirth on a low plane of existence.

Yaldabaoth is a gnostic deity or demiurge, appearing in the religion of Gnosticism, which was a dualistic belief system that existed in the early Christian era. It is often described as the creator of the material world, but is considered to be a false god or an inferior god who is ignorant of the true spiritual realm. In some Gnostic texts, Yaldabaoth is seen as the ruler of the archons, a group of lower spiritual beings. The name Yaldabaoth is thought to have been derived from the Aramaic word "yalda," meaning "child," and "baoth," meaning "of the voice."

The Sabbateans were a Jewish religious movement that emerged in the 17th century in the Ottoman Empire, which is present-day Turkey. They were led by Shabbetai Tzvi, a charismatic figure who claimed to be the long-awaited Jewish Messiah. The movement attracted a large following, particularly among the Jewish communities in the Ottoman Empire, but also in other parts of Europe and the Middle East.
The Sabbateans rejected traditional Jewish beliefs and practices and advocated for a radical reinterpretation of Jewish law and tradition. They believed that the laws of the Torah were temporary and that the coming of the Messiah would herald a new era in which the laws would no longer be binding. They also believed in the doctrine of "the redemption through sin," which held that the Messiah would lead the Jewish people into a state of sin, in order to purify them and bring about a new era of spiritual enlightenment.
The movement caused a great deal of controversy and division among the Jewish communities, and ultimately, Shabbetai Tzvi was forced to convert to Islam under pressure from the Ottoman authorities. Many of his followers also converted, but a significant number of them continued to secretly practice Sabbatean beliefs and formed secret societies. The movement eventually faded away, but it had a lasting impact on Jewish history and continues to be studied by scholars of Jewish and religious studies.
It's important to note that, despite the conversion of the leader, many of his followers kept the faith and even formed different sects, some of them still existing today, like the Donmeh, a sect of Turkish Jews with a strong influence of Islamic and Gnostic beliefs.

The Sabbatean Frankists were a Jewish sect that emerged in the 18th century as a continuation of the Sabbatean movement that began in the 17th century, led by Shabbetai Tzvi. The sect was named after its leader, Jacob Frank, who was a disciple of Shabbetai Tzvi and claimed to be his successor. Frank taught that the coming of the Messiah would be accompanied by the dissolution of the traditional Jewish laws and the establishment of a new era of spiritual enlightenment.
The Sabbatean Frankists believed in the doctrine of "the redemption through sin," which held that the Messiah would lead the Jewish people into a state of sin in order to purify them and bring about a new era of spiritual enlightenment. They also rejected traditional Jewish beliefs and practices, and many of them converted to Catholicism or Eastern Orthodox Christianity, while still secretly practicing Sabbatean beliefs.
The sect caused a great deal of controversy and division among the Jewish communities and was fiercely persecuted by both Jewish and Christian authorities. Despite this, the sect managed to survive and even flourish in some areas, particularly in Eastern Europe, where many of its members held prominent positions in the Jewish communities.
It's important to note that, despite the persecution and the conversion of many of its members, the Sabbatean Frankist sect continued to exist and influence various Jewish communities in Europe during the 18th and 19th centuries. However, the sect eventually faded away and today is mostly studied by scholars of Jewish and religious history.

Samhain (pronounced "sow-en" or "sah-win") is a festival in ancient Celtic religion, typically celebrated around the end of October and beginning of November. It marks the end of the harvest season and the beginning of the "darker half" of the year. It is considered one of the four Gaelic seasonal festivals, along with Imbolc, Bealtaine, and Lughnasadh. Some modern Pagans and Wiccans also observe the holiday, which is often associated with themes of death, ancestor worship, and divination. It is considered one of the most important festival for the Wiccans and Celtic Neopagans.

The Djedi (also spelled Djedhi or Djedai) is a figure from ancient Egyptian mythology. The Djedi is said to be a powerful magician who possessed secret knowledge and was able to perform incredible feats, such as bringing the dead back to life. The name "Djedi" is also associated with the god Ptah-Sokar-Osiris and the god of wisdom, Djehuti (also spelled Thoth) .
In the story of the "Tale of the Doomed Prince," which is from the Westcar Papyrus, Djedi was a powerful magician who lived during the reign of Khufu, the builder of the Great Pyramid of Giza. According to the story, Djedi was able to use his magic to bring a dead prince back to life, impressing the pharaoh and earning his favor.
Djedi is also associated with the concept of "djed" which is the backbone of Osiris which symbolizes stability, stability, strength and continuity of life. The djed hieroglyph is one of the more ancient and commonly found symbols in Egyptian mythology.
You must log in or register to reply here.
Share:
Facebook Twitter Reddit Pinterest Tumblr WhatsApp Email Link
Top