We SERIOUSLY Need a Comedy Section!

...while not precisely within the bounds of the title of this thread, it really doesn't fit anywhere else on VC...
but if you have ever enjoyed watching the reruns on PBS, this is right up your alley...
I was amazed to learn #7 and #8 on this list
hint: He's the "Happy Little Trees" painter, featured on PBS...... long deceased....

Start a comedy thread in The Lounge and I promise I’ll add to it.

Bohemian Rhapsody parody of today's social media keyboard warriors... on all sides...
...very funny and well done with the lyrics and phrasing... both are spot-on and fit the song perfectly


...forgot to point it out when I first posted... watch when they'all 'fighting'... the older lady who appears earlier, Chakra Kahn (the Peacemaker) does the 'Grammar Police' thing by fixing the "YOUR WRONG" on a spectator's poster sign to the gramatically correct form: "YOU'RE..." (You are) Wrong....

"In the tradition of the Irish masterwork comes......"

Transquesta said:
..."But officer, I was only gonna be gone for a second!"

Well life itself is a comedy afterall!

We have the lounge and the den for that tho..

@Awoken2 , thanks for the intro to Dry Bar comedy. That Drew Barth is funny. So was the one about the colonoscopy.

This is the best!

Huge stash of walnuts squirreled away under car bonnet in US 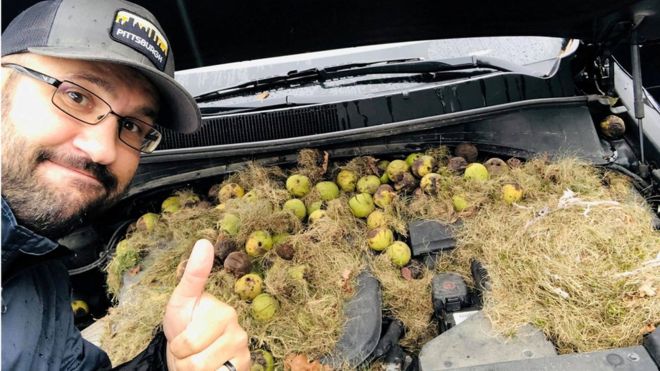 A couple in the US city of Pittsburgh found a surprise stash of hundreds of walnuts hidden under their car bonnet.

The nuts, along with a lot of grass, are believed to have been collected there by squirrels making preparations for winter.

Chris Persic posted photos of the car on Facebook warning that "rodents and vehicles do not mix".

Holly Persic only discovered the hoard when she was driving and noticed a burning smell and strange sound.

After looking under the bonnet, she found the stash, which the couple attempted to clear out before taking the car to a mechanic. 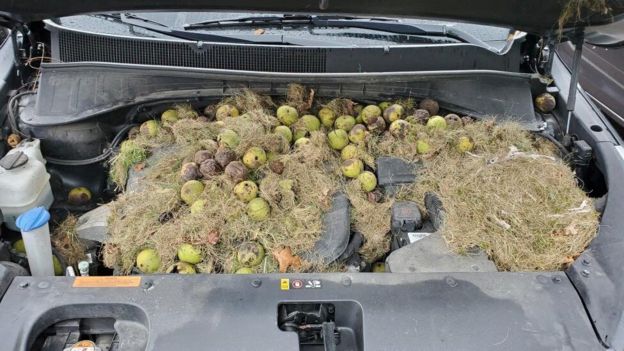 Image copyright REUTERS Image caption The original photo posted on Facebook, which got over 500 shares

"They were everywhere, under the battery, near the radiator fan," he told CNN."The walnuts on the engine block were black and smelt like they were definitely roasting."

As autumn set in, walnuts started falling from the trees a few weeks ago meaning the squirrels must have worked quickly to build their hoard.

Although there was no damage to the car, Mr Persic warned others to check under their bonnets. 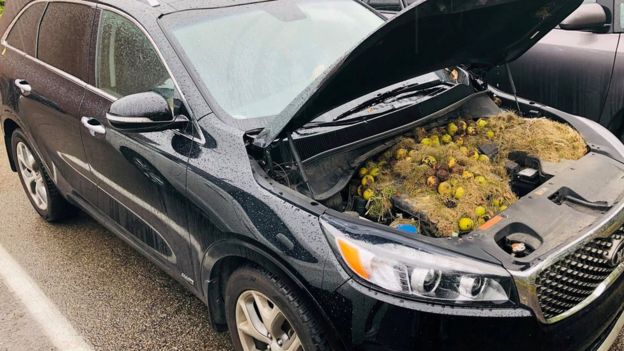 Due to recent rain the grass under the bonnet was damp but if it had been drier it could have caught fire, he said, leading to far more drastic consequences.

"Long story short, if you park outside, do yourself a favour and check under the hood every once in a while," he said.