James Vanderboom's life drastically changes when he plants a special seed in the garden of the house he has inherited. Expand your bloodline by unlocking portraits in the tree of life. Rusty Lake: Roots is the second premium point-and-click adventure by Rusty Lake, the creators of the Cube...

yeo0milk__ said:
Hi guys! I have to update that I found some alarming lyrics within the song: Uragirimono no Requiem in Jojo’s Bizzarre Adventure Part 5. Jojo’s had occultic themes ever since part 3.

Faith is just another worthless sign
I will live my life as Godless soul
Gang-Star!
My fear's gone, it is gone
Only a rage is left in my faithless world
Since I have betrayed my God
All is gone, now revenge
This fate is mine
I will survive on my own
This is my way to stay Gold

Fight with me, there is no hope I've tried
Won't give up, it is my destiny
Don’t care
Don’t you ever give me mercy
When my life is gone with the wind
Nothing more to lose, there’s no more
Fiery soul, burning every road to past

Fight with me with your raging fists
Let your soul burn into screaming pain
Don’t care
I’m on my way to the true wisdom
We’ll all fight, we're gonna fight the pain

This song is from Lucifer’s perspective disguised as Giorno’s

WOW. Whoever wrote this song, it was like they wrote under the influence of a fallen angel. It brought two verses to mind

Revelation 12:4 “And his tail drew the third part of the stars of heaven...” (Samael, aka Lucifer, influenced others to follow his rebellion against God)

Jude 1:6, 13 "And the angels which kept not their first estate, but left their own habitation, he hath reserved in everlasting chains under darkness unto the judgment of the great day"..."Raging waves of the sea, foaming out their own shame; wandering stars, to whom is reserved the blackness of darkness for ever." (Now, they are bitter that they have no chance to return to their former glory, but are reserved until the day of judgment. Wallowing in their own shame, angry, because they made the wrong choice) 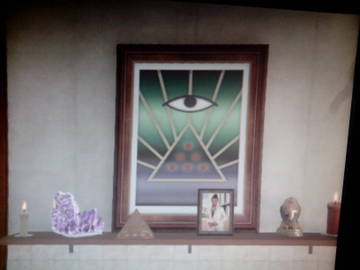 I came across a video presenting an "Illuminati Simulator VR", a Freemason Temple simulator:

First of all, why didn't I see this? Second, is there any media that isn't in on this? When even "Christian" literature like Narnia is on it, what else remains? Though personally I have access to alternative markets, I don't know about the rest. Third, recently there's been a trend of games with children as the stars. Initially I liked this, but after playing some of them, which I may post about later, I'm don't, at all.

Aazaad said:
First of all, why didn't I see this? Second, is there any media that isn't in on this? When even "Christian" literature like Narnia is on it, what else remains? Though personally I have access to alternative markets, I don't know about the rest. Third, recently there's been a trend of games with children as the stars. Initially I liked this, but after playing some of them, which I may post about later, I'm don't, at all.
Click to expand...

Don't be scared -- entertainment industria is huge one. Not each videogame harmful -- just avoid games with satanic symbolic.
Will be intresting to see.

Vmort said:
Don't be scared -- entertainment industria is huge one. Not each videogame harmful -- just avoid games with satanic symbolic.
Will be intresting to see.
Click to expand...

I'm actually most scared about video games. With books, movies, music, I have the alternative local market to turn to, which is quite empty in games department. As for there being good video games, as someone who loves gaming, I have my doubts, they're corrupting even simple arcade games.

The Simpsons: Hit and Run - I had a lot of fun playing this game when I was younger... It begins with mysterious wasps descending on earth. It's later discovered that these wasps are actually drone cameras for an intergalactic reality show that makes fun of humans. At the end of the game the Simpsons fight off an alien invasion.

Very seldom have I noticed any occult-inspired imagery from Nintendo in their games. But there is this... Checker pattern all over the floor inside the castle in Super Mario 64. After collecting 10 stars, the sun on the main floor of the castle will illuminate and unlock a world in which Mario can gain the ability of flight.

In Super Mario 64, entering the Tower of the Wing Cap secret course requires Mario to stand on the sun carpet in the castle lobby and look upwards while in first-person view. However, the code checks...

Technopagans: May the astral plane be reborn in cyberspace by Erik Davis

Oh and then there's this.... In Super Mario 64 (released 1996), Mario is required to pound down these two twin pillars in order to drain the castle's moat.

This sort of matches real life as after the Twin Towers were pounded down, Ground Zero became a continuously draining water fountain.

A discussion on another thread reminded me of a dark and quite nasty series that was widely distributed by Saban (Power Rangers):

Pinocchio: The Series, also known as Saban's The Adventures of Pinocchio and known in Japan as Mock of the Oak Tree (樫の木モック, Kashi no Ki Mokku) in Japan, is a 52-episode anime series by Tatsunoko Productions first aired on Fuji Television in 1972, which was edited by Saban in 1990.[1] The story is based on the 1883 novel The Adventures of Pinocchio by Italian author Carlo Collodi.

Unlike the lighter, more cheerful tones of the Disney film adaptation and Nippon Animation's version Piccolino no Bōken, this series has a distinctly darker, more sadistic theme, and portrays the main character, Pinocchio (Mock), as suffering from constant physical and psychological abuse and freak accidents

"That night Pinocchio sneaks into Johnny's house and steals a toy elephant, thinking it was a heart because it was carefully wrapped up, upon learning what a heart really is he returns with one of his father's chisels and wakes Johnny when he attempts to cut his heart out, the resulting ruckus wakes his parents who try to kill Pinocchio for his actions. "

"While touring the castle the countess reveals to Pinocchio that she is over 500 years old and that night she sheds her facade and attempts to bite the puppet's neck as he sleeps, only to realise that he is made of wood and has no blood for her to drink, the next day she suggests that he invite his classmates to play as an alternative to the mute dwarves living in the castle, activating the mind control spell in her bite as he leaves. "

There's a very odd feel to it. The puppet is a nasty piece of work!

American MCgee Alice
During an errand, Alice is struck by a hallucination and believes herself to be in Wonderland again. Though initially idyllic, the peaceful land quickly becomes corrupted by an entity called the Infernal Train that rampages through it, leaving behind the Ruin, a force that attempts to stop Alice. Alice meets with the Cheshire Cat who affirms that it is some outside force, not Alice, that has caused this corruption, and urges her to seek out former friends and foes to discover the source of the Train. Throughout the rest of the game, Alice briefly returns to reality between episodes occurring within Wonderland. In the real world, Alice learns from the family lawyer that her older sister, Elizabeth (nicknamed "Lizzie"), was first to die in the fire, despite being the farthest from its source, and had been locked in her room.

Furious, Alice confronts both Dr. Bumby in the real world at the Moorgate station and Dr. Bumby's Wonderland counterpart, the Dollmaker, in her fantasy on the Infernal Train. Dr. Bumby admits to his crimes, and even attests to setting Alice's home on fire after Lizzie refused his advances, removing any witnesses to having raped her that night. He points out that by wiping out her Wonderland, he will make her forget the events of that night, while he continues as a member of high society and secretly sell young children for prostitution. Alice defeats the Dollmaker in Wonderland, giving her the strength in the real world and in her mind to push Dr. Bumby into the path of an oncoming train, killing him.

As Alice leaves the station, she finds herself in a hybrid vision of London mixed with Wonderland, Londerland. Alice wanders into the unknown terrain as the Cheshire Cat monologues that Alice has found the truth that was "worth the pain fighting for", and Wonderland, though damaged, is safe for the time being.


MK ULTRA Themes, Satanic themes. I wonder if American MCgee is victim of them or he is just tring to warn us.

The Illuminati, the Freemasons, & other satanists have a penchant for handsigns, as they do for cartel signaling. A Primer on Satanic Cartel Signaling – Thunderbirds, Firebirds, & Pho…

Please safe and cope and share. Easier to spot them this way.

The Wolfenstein games, on the face of it, are about killing Nazis, the protagonist being B.J. Blazkowicz, a Polish Jew. But these games, especially the ones produced by id Software, revolve heavily around the idea of Nazi occultism. An episodic addition to Wolfenstein 3D was titled Spear of Destiny, a reference to the spear which pierced Jesus' side at the Crucifixion. But more specifically it is a reference to the book "Spear of Destiny: The Occult Power Behind the Spear Which Pierced the Side of Christ" by Trevor Ravenscroft. This is evident when we consider that the 2009 sequel to Return to Castle Wolfenstein was created by Ravensoft (aka Raven Software), long-time collaborators with id Software and known for the games Heretic, Soldier of Fortune, and most Call of Duty games since Black Ops. Also, in Return to Castle Wolfenstein, there are depictions of the Crucifixion of Jesus in various places, for instance on a dresser door which, if destroyed, the player is awarded with full health and armor.