November 28, 2017 "Information Clearing House" - Retired Adm. Mike Mullen, former chairman of the Joint Chiefs, said on ABC'S "This Week" that nuclear war has become "more probable than it used to be. And it scares me to death, quite frankly."

Mullen also said he has concerns about the fact that generals have taken such high-ranking and high-profile roles in the Trump administration, and that he was disappointed that John Kelly has shown he'll be "supportive of the president no matter what."

Full quotes:
On Kelly: I mean, certainly what happened very sadly a few weeks ago when he was in a position to both defend the president in terms of what happened with the gold star family and then he ends up — and John ends up politicizing the death of his own son in the wars. It is indicative of the fact that he clearly is very supportive of the president no matter what. And that, that was really a sad moment for me.
This article was originally published by Axios -

DARPA Wants to Use Genetic
Modification to Turn Plants into Spy Tech.

Lemme guess...the seeds will be dropped with chemtrails around the world and the valley down below will be a living and breathing spy

The Government is coming for your Bitcoin

9/11 was an Israeli Masterminded False Flag, with help from American Traitors
Excerpts:
First we were told 9/11 was Afghanistan's fault, so we bombed them to bits. 16+ years later, we're still there and the CIA poppy fields are doing great. Then Saddam played a part, we bombed and destroyed Iraq. Then Qaddafi had a role, so we 'No-Flyed' Libya to death. Then it was Assad that helped 'al CIA Duh,' so we bombed the hell out of that nation and are still there. Then it was Iran, so they got sued and are in the Pentagon's gun sights. Whose next, Lebanon?

This is all part of Israel's plan to 'Balkanize' the ME so they are the only power and to make it easier to steal more land. Now the murderous Khazar land thieves have their sights set on the Stolen Golan, wanting their bitch Trump to deed that to the land thieves.
and

9/11 was an Israeli masterminded False Flag with help from traitors in the WH, the Pentagon, CIA, FBI and NSA. With generous help from the Lying MSM.

'Lucky Larry' is a lying sack of shit. Fire Departments don't 'pull' buildings. I'm a retired career fire lieutenant and can tell you first-hand that fire departments don't have the training, knowledge, experience, equipment or the HE needed to "PULL" a skyscraper.

@DesertRose
The guy in that video is crazy and he literally said Muslims want to take over the world. Also it sounded like Trump said "that's amazing" not "I'm a mason".

Thanks @mecca deleted it:

A Brilliant And Alarming Book Of Great Historical And Political Importance
December 13, 2017
FacebookTwitter

Before the Pentagon Papers, before Watergate, before his involvement as an advisor in Viet Nam, Daniel Ellsberg worked in the U. S. national security system as a nuclear planner. It’s a memoir of that time, of the still classified policies of nuclear strategy, and of the secret, often reckless protocols that had been developed for their implementation. 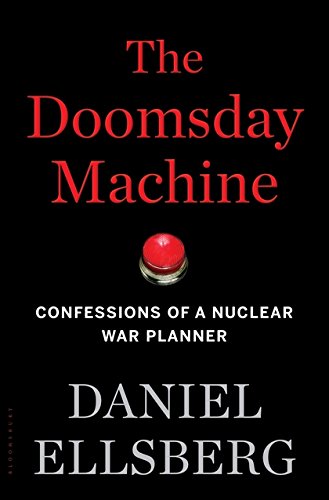 Much of the information and revelations in this book has never been exposed in previous memoirs by the principals of the period nor in subsequent histories. This makes it a history document of enormous importance.

This book exposes for the first time the secret plan developed by the government and approved by the President and the Joint Chiefs of Staff to launch a nuclear strike against Russia and China, under a range of possible circumstances, that they knew was likely to kill 600,000,000 people worldwide.

The title comes from the iconic film, Dr. Strangelove, and it demonstrates that the movie is more a documentary than a work of the imagination.

“All three buildings were destroyed by carefully planned, orchestrated and executed controlled demolition.”

– Professor Lynn Margulis, Department of Geosciences, University of Massachusetts at Amherst, and National Academy of Science member, one of many academics who has been very outspoken regarding 9/11 (source)
https://www.lewrockwell.com/2017/12/no_author/when-will-the-govt-stop-lying-about-9-11/

Ken O'Keefe shared The Tech Anarchist's video.
December 20 at 2:12pm ·
Don't know who put this video together but it is going viral so many thanks whoever you are. Anything that helps people realize that we can turn this world around for the better and live in abundance is a good thing.

We can point fingers at any group-- Jews, Muslims, Christians, whatever. At the end of the day, it is still Satan.. regardless of the people through whom he is acting.

elsbet said:
We can point fingers at any group-- Jews, Muslims, Christians, whatever. At the end of the day, it is still Satan.. regardless of the people through whom he is acting.

Agreed.
Hey elsbet, I would say the Christian, Muslim and Jewish Zionists are the problem.
Warmongers come in all shapes and groups. Unfortunately.
It is always good to assess team Satan by their actions. They usually use evil means and action to bring about their will.

Read this article today. Good to know there are people from all faith groups trying to highlight the wrongs.
So What? Christians
By Laurence M. Vance
December 26, 2017
https://www.lewrockwell.com/2017/12/laurence-m-vance/so-what-christians/

DesertRose said:
Read this article today. Good to know there are people from all faith groups trying to highlight the wrongs.
So What? Christians
By Laurence M. Vance
December 26, 2017
https://www.lewrockwell.com/2017/12/laurence-m-vance/so-what-christians/
Click to expand...

I like Rockwell, historically-- it's been awhile. Will check out later today.

Oh boy! A New World Joke thread! So what are these make believe government and world controlling folks up to now? Sending alien holograms to Kim Jong Un or something....