I remember these sort of videos used to be all over youtube at one point in time and used to get allot of attention from the conspiracy community. Idk if you can still find them on youtube any longer, but you can on bitchute. This video was originally made in 2005. The guy says these mass produced human sized coffin like boxes are owned by the CDC. I wonder if they are still there.... 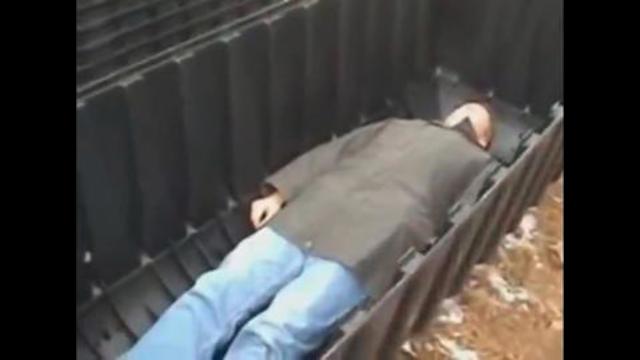 The CDC, the New World Order and FEMA coffins.

They have planned the genocide of the human race for a long time. FEMA-CDC PLASTIC COFFINS INVESTIGATED [2005] (VIDEO) FEMA and CDC have been working together since the very creation of FEMA. Here we see the plastic coffins which are owned by th…

One cant help but connect the dots and wonder...

Description on the video:

"""They have planned the genocide of the human race for a long time.
FEMA-CDC PLASTIC COFFINS INVESTIGATED [2005] (VIDEO)

FEMA and CDC have been working together since the very creation of FEMA. Here we see the plastic coffins which are owned by the CDC. For well over a decade, they were staging these plastic coffins near all major urban areas. Since CDC is involved, you know it has something to do with DISEASE, VIRUS, and/or INOCULATION (aka Biowarfare/Bioweapon).

During 2000 to 2012 there were many Truthers that were filming the plastic coffins that hold 3 to 6 people each, as well as concrete tombs that hold 2 to 4 plastic coffins. The plastic coffins were stored in vacant lots all over the country near large urban areas. And the tombs were buried in ground with only a foot or two of dirt on top of them so they could easily be uncovered and used. OUT OF SIGHT, OUT OF MIND. They purchased millions of these concrete tombs and plastic coffins over 10 years in advance so the Sheeple would forget about them. Most people have short-term memories and no ability to breakdown the Government Conspiracy Theories. Agenda 21/Agenda 2030 is coming like a freight train. The PLANdemic was faked to push the mRNA INOCULATION onto the COVIDIOT SHEEPLE. These are the people that will be CULLED very soon, and most Truthers think before 2025, rather than 2030 now. The DEMONrat Globalists have always been thinking long-term (aka The Georgia Guidestones), and why did so many simply forget about the millions of coffins and tombs the federal government bought and paid for with taxpayers money, and then pre-staged for a mass extinction future event. If you have taken the jab, you will be dead soon enough. A virus will not be killing you, but rather the mRNA shot, which will likely be activated by a burst from the 5G towers.
Source: Sergeant Major."""
N

While I don't believe the Fema theory I do think it went viral a decade ago for a reason. Just like how the anti-antivax propaganda went viral in the years before Covid. It could be a case of direct causation or it could just be significant correlation we should, individually and as a planet, be aware of letting happen to us.
You must log in or register to reply here.
Share:
Facebook Twitter Reddit Pinterest Tumblr WhatsApp Email Link
Top