Stand With Ukraine? No Thanks.

I hate this Zelensky guy. :

And look what Vlad Putin is doing. Poor, under sanctions, and yet: 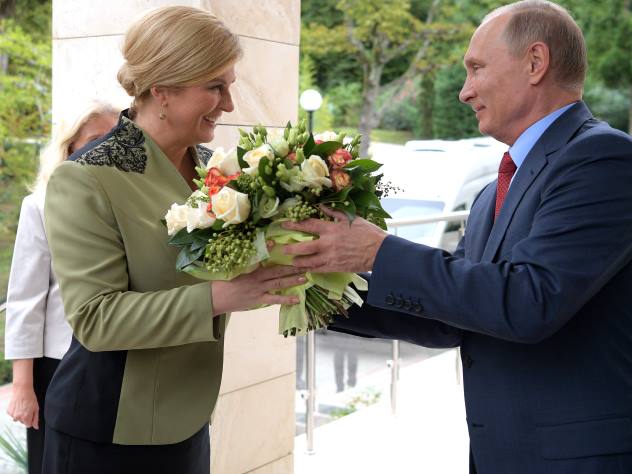 18 Oct 2017, 19:38
Despite the sanctions imposed by Europe and difficult political relations against the background of anti-Russian restrictions, Russia conducts trade with Croatia, which after some decline began to grow again.

The saddest thing about this money laundering operation is now people just accept it as an everyday thing and are bored with it. Kind of like Covid.
Q

And look what Vlad Putin is doing. Poor, under sanctions, and yet:

18 Oct 2017, 19:38
Despite the sanctions imposed by Europe and difficult political relations against the background of anti-Russian restrictions, Russia conducts trade with Croatia, which after some decline began to grow again.

Yeah. But I'm sure Vlad is just as cavalier today; I'm sure there are pictures to prove it!

Well I just hope that people who are stuffing themselves with food today and watching football are thankful for the fact that they are not living in Ukraine. Even though it is a money laundering operation so many are suffering for the greedy politicians who care nothing about anything but making a profit. Remember when Americans protested Vietnam? Where are the ones protesting this travesty? People burned down cities when Pink Floyd was supposedly killed by the police but can't be bothered now to care about Ukraine because it might interfere with their viewing of the latest football or basketball game.

Well, they are interested and excited, aren't they? Some of them rant and express outrage at the "invasion of sovereign Ukraine by the terrible dictator Putin", which is abundantly fed by the authorities, the mass media and the "left" media. Others are excited and outraged by the" US/NATO proxy war against cornered and sanctioned Russia", which is regularly and profusely flooded by alt-media and" right-wing " media and specialists.

So there is excitement and protest. Which is quite enough for almost no one to be interested in the identical new-normal new-world-order transformations of society and man that all declared warring parties are carrying out in their own states and zones of influence, co-operating at a high international level for all this. (As now, as a recent example, all the warring parties have signed a G20 agreement that everyone around the world should be "bio-insured," have lots of vaccines, have digital certificates, which will grow into digital identifiers for everything. And also, coincidentally, almost at the same time, the West and Russia announced the launch of their pilot projects for the CBDCs. Shortly before the G20 summit, all agreed together on combating climate change at COP27, where Putin's special representative on climate issues, Ruslan Elderegiev, was also present. This will soon lead to ESG conditions for business and carbon credits for ordinary people. Etc., etc., etc...)

So everyone is protesting something against what they think is true. What is to be protested in the case of the laundering of these millions or billions? What does this show: that the greedy deep state is again using war for profit? Well, so this further shows that the Deep State has produced this war, through proxy Ukraine, and this bastard Zelensky. The war with Russia is real. Russia, which participates in agreements with the West on everything and does the same thing the West does in Russia.