The events occur at an unnamed country on the brink of revolution. The power in the state is held by the Three Fat Men, wealthy oligarchs with monopoly on the state's natural resources. A long brewing resistance is led by two men: Prospero the Gunsmith and Tibul the Acrobat. During a major confrontation with the government's forces, Prospero is captured and is scheduled for execution. However, at the same time, guardsmen defectors wreck the doll of Tutti, the designated heir of the Fat Men. The doll is a marvelous creation, capable of singing, dancing, and looks like a real girl, even growing up like one. The Fat Men summon a famous scholar, Doctor Gaspar Arnery, and order him to fix the doll before the next day. The Doctor, unknown to them, is a sympathizer for the resistance, and had helped Tibul escape pursuit by the army.

Gaspar attempts to repair the doll, but finds out it's impossible to do in less than three days. Fortunately, he encounters Suok, a young girl who looks exactly like the broken doll, and convinces her to cooperate with him. She manages to get the key to Prospero's cage from Tutti. When she goes to release him during the night, she is spoken to by another prisoner, a fur-covered humanoid creature. The prisoner calls her by name and passes her a note before dying.

Suok releases Prospero, who manages to flee. This time the uprising is successful. After it ends, Tutti and Suok appear before the people and read out the note given by the prisoner. He was once a man named Toub, a great scholar who made the doll for Tutti at the Three Fat Men's order, to replace Suok, who was his twin sister. Suok was sold to the circus. Then the Fat Men demanded he replace Tutti's heart with an iron one, and, once he refused, caged him.

Have vivid descriptio of cannibalism scenes 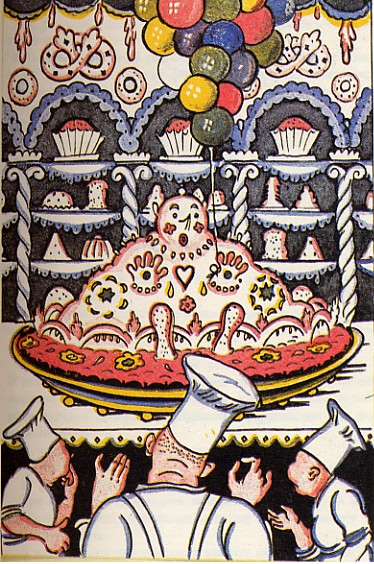 Tutti is held in his house locked and drugged and programmed just like real MK ULTRA VICTIMS are. Doll girl Souk presented. p***philia!