Is this the real reason the American Left hates Vladimir Putin so much? In a fiery speech Thursday, the Russian leader railed against liberalism, slaughtering leftist sacred cows with abattoir-level abandon. Among his targets were cancel culture, anti-Western revisionist history, and so-called transgenderism.

Speaking at the annual meeting of the Valdai Discussion Club in the Black Sea resort of Sochi, Putin stressed that his country should adhere to its own “spiritual values and historical traditions,” while steering clear of “sociocultural disturbances” in the West.
Some Westerners believe “the aggressive deletion of whole pages of their own history, reverse discrimination against the majority in the interests of minorities … constitute movement toward public renewal,” Putin said. “It’s their right, but we are asking them to steer clear of our home. We have a different viewpoint.”
Putin, who told the Financial Times of London newspaper in 2019 that liberalism had become “obsolete,” has loudly advocated for what he considers to be traditional family values. In his Thursday remarks, he said the notion that children are “taught that a boy can become a girl and vice versa” is monstrous and “on the verge of a crime against humanity.”
Click to expand...

Elaborating on this trespass of having a child “choose” his sex (an impossibility), which is sometimes done without parental consent, Putin said, “You push the parents aside and make the child take these decisions that can destroy their lives.”

“Putin also discussed how liberals in the West want to eliminate what he called ‘traditional interpretation of such basic values,’ which include designations such as ‘mother, father, family, and the distinction between sexes,’” related Town Hall, providing more detail.

“‘The proponents of new approaches go so far as they want to eliminate the whole notions of men and women, and those who dare say that men and women exist and this is a biological fact, they are all but banished,’ he said,” the site continued. “Parent number one, parent number two, or the parent that has given birth, or instead of breast milk, you say human milk. And you say all of that, so the people who are not sure of their sexual agenda [“identity”] are not unhappy.”

My, it sounds as if Putin knows more about what’s going on in America than Attorney General Merrick Garland does.

But such remarks aren’t unusual for Putin. In fact, it’s ironic: The Soviet Union used to call the West decadent while we called it godless.

Now Putin has been criticizing the West for being decadent and godless. “Many Euro-Atlantic countries have moved away from their roots, including Christian values,” he said in a December 2013 State of the Nation speech.

“Policies are being pursued that place on the same level a multi-child family and a same-sex partnership, a faith in God and a belief in Satan. This is the path to degradation.’”

This roughly coincided with Russia’s enactment of laws prohibiting homosexual propaganda and was a salvo against both the West’s Great Sexual Heresy and what enables it: relativism.

In another shot at relativism, Putin also stated in 2013, “Society is now required … to accept without question the equality of good and evil, strange as it seems, concepts that are opposite in meaning.”

The Russian president then took aim at multiculturalism: “Today, many nations are revising their moral values and ethical norms, eroding ethnic traditions and differences between peoples and cultures.”

This was followed in 2014 by the release of Russian Culture War 2.0. In a document called “Foundations of the State Cultural Policy,” the Kremlin doubled down and wrote, “Russia must be viewed as a unique and original civilization that cannot be reduced to ‘East’ or ‘West.’… A concise way of formulating this stand would be, ‘Russia is not Europe.’” The document goes on to state that Russia rejects “such principles as multiculturalism and tolerance” and “projects imposing alien values on society.”

Now is it clearer why our Left hates Putin so much? He’s white, male, at least nominally Christian, straight, and absolutely unwoke.

Another irony here is that our leftists assume their “enlightened” ideas are the wave of the future, yet they may just be a flash in the pan. (“A lie has speed, but Truth has endurance,” do remember). Just consider that even China, despite being the world’s most atheistic nation, is rejecting sexual devolutionary standards. To wit: Beijing has just banned “sissy men” from TV and has ordered broadcasters to “avoid performers who ‘violate public order’ or have ‘lost morality,’” reported the Associated Press last month.

In other words, don’t ask Putin or Xi Jinping what their personal pronouns are (though it’s rumored they are “Shirtless Beats Witless” and “You’ll Bust Me Upside the Head if I Talk About My Gender Fluid.”

None of this is surprising. Putin may not be ready for canonization, but he surely knows that vice — or “openness to new lifestyle choices,” as the leftists would put it — degrades societal fabric. After all, he was once part of the KGB, an entity that used to encourage “liberal” ideas (e.g., acceptance of perversion) in America as part of a “demoralization” process.

Xi must know, too. For just over a year ago his state-controlled media lauded the anti-American 1619 Project, essentially giving our Left a “You go, girl…or boy…or whatever.”

Of course, when the despotic Chinese are encouraging your agenda, you may want to consider whether you’re on the wrong side. 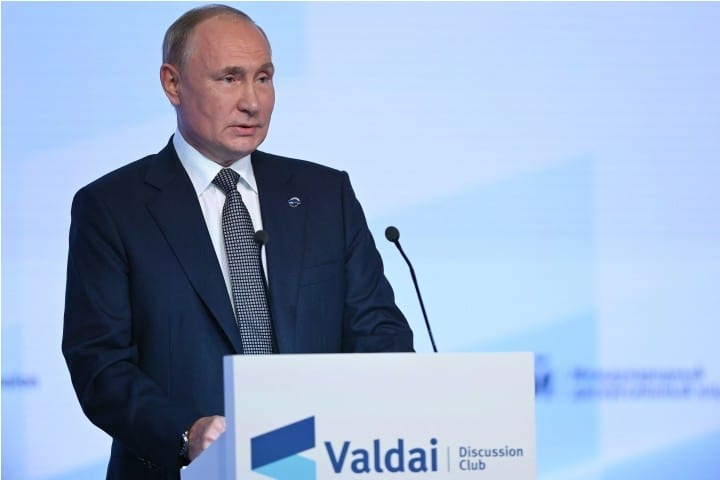 In a fiery speech Thursday, Vladimir Putin railed against liberalism. Among his targets were cancel culture, anti-Western revisionist history, and so-called “transgenderism.” ...

Lyfe said:
Is this the real reason the American Left hates Vladimir Putin so much? In a fiery speech Thursday, the Russian leader railed against liberalism, slaughtering leftist sacred cows with abattoir-level abandon.
Click to expand...

except the vaccine. Putin's take on the vaccine illustrates that his country is run by the same people as the US.
B

I'm not a Putin supporter, but at least he got this right. How sad is it that the former Soviet Union once called "the evil empire" has a higher morality than the ones accusing them of being evil? It almost seems as though the roles have changed. America is now seen as the evil empire, and the russkies not so much anymore.
You must log in or register to reply here.
Share:
Facebook Twitter Reddit Pinterest Tumblr WhatsApp Email Link
Top