Marx in the forehead

In Revelation 13:16-17 one can read about "the mark" of "the beast". Revelation is the vision of the future that John saw, and then described.

What is the mark and what is the beast are questions that have been asked by many.

An interesting things about the verse, if one reads it carefully, is that it will be noticed that it says that "the mark" is received either IN the forehead (not on the forehead, but in it), or in the hand.

So what does in the forehead mean? It means the mark is received in the mind, as a way of thinking.

Vladimir Lenin is quoted to have made the following remark: “Give me just one generation of youth, and I'll transform the whole world.”

The youth of today have a radically different outlook and view when compared to previous generations. Their views have been radically transformed through school curriculum. Now, the youth are being used by those forces who want to press forward their transformation of society along one world government lines. This includes disarming the populations. Most of which have already been disarmed - but not the US, where the second amendment has so far stood in the way. But, how much longer will it stand?

This image below was borrowed (saw it on Rense.com) and would purportedly be from Bill Cooper's book: 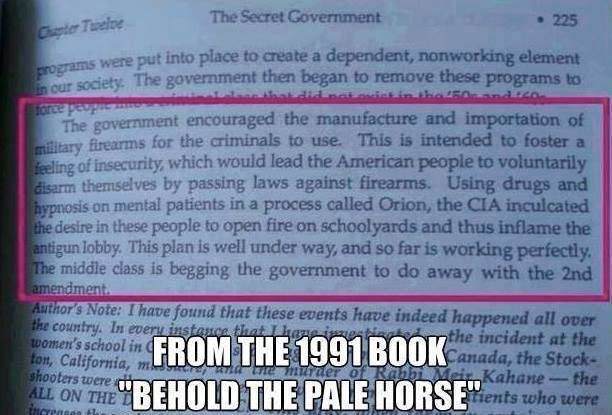 That title is borrowing from the book of Revelation. Revelation talk about the Four horsemen of the Apocalypse and the Two Witnesses.

Who are the four horsemen, and who are the two witnesses?

Below are some Scriptural quotes from the King of kings' Bible, which contains added notes about the horsemen and mentions communism as being tied to the RED horse of Revelation. Communism worldwide uses red as its color. A picture of the "Deutsch Mark" as it appeared in the denomination of 100 "Marks", was also added in. It's interesting to "note" that it actually says "Mark" on the note and then thinking that those notes were put into people's hands.

In the Koran, there is also an interesting verse that refers to a Beast. In the King of kings' Bible, this is identified as being the same "beast" that is mentioned in Revelation:

King of kings' Bible
Sura 27:82. And when the Word is fulfilled against them (the unjust), We shall produce from the "earth" a Beast (Communism - Revelation 11:7) to (face) them: he will speak to them, because mankind did not believe with certainty in Our Signs.

Revelation continues to reveal more about what the "beast " is and gives its number, and it's number is the number of man. (Man is the beast). Marx-ist communism is an athiest ideology, that tries to make everything about MAN and about man ONLY (although some minor groups of people have tried recombine religious or Godly thought back into it). Therefore, it is an ideology of man all by himself. It does not call upon God for Wisdom and Guidance, but tries to put MAN at the beginning, man in the middle, and man at the end. It is all about man, man, man... In Genesis the first book in the Bible, we are told that man was created the 6th day, so 6 is the number of man. That is also how the beast is identified in the book of Revelation. The number of the beast, is the number of man. Also mentioned are God's Two Witnesses:

Revelation
11:3 And I will give [power] unto my Two Witnesses (Isa. 43:12), and they shall prophesy a thousand two hundred [and] threescore "days", clothed in sackcloth. (42 months of 30 "days" each = 1260 "days", each day for a year - Num. 14:34; Ezekiel 4:6; Dan. 12:7).
11:4 These are the two "Olive" trees, and the two candlesticks (Ephraim and Manasseh) standing before the God of the earth.
11:5 And if any man will hurt them, fire (gun-fire which looked as though it) proceedeth out of their mouth, and devoureth their enemies: and if any man will hurt them, he must in this manner be killed.
11:6 These have power to shut heaven, that it "rain" (spiritually) not in the days of their prophecy: and have power over "waters" (ch. 17:15) to turn them to blood (reds), and to smite the earth with all plagues, as often as they will.
11:7 And when they shall have finished their Testimony (the 1260 "days" ended on 9/Dec./1917 - the day that Jerusalem was liberated from Gentile domination by Israel - British forces - Ezekiel 25:14), the beast (system - Satanic) that ascendeth out of the Bottomless Pit shall make war against them, and shall overcome them, and KILL them.

(In JAH's "The Four Horsemen of The Apocalypse and the Two Witnesses" more is explained, including this below:

...The year that Jerusalem was liberated by British/Israel soldiers from Turkish/gentile domination was 1917. This same year (day in prophetic coded language) 1917 saw the RED communist revolution in Russia and the beast (system) that rose out of the "bottomless pit" (Satanically inspired and controlled) make war against the Two Witnesses for 70 years, all over the planet and will, soon, also, exactly as prophesied, overcome and KILL the Two Witnesses - the U.K. and U.S.A....)

Revelation
6:4 And there went out another horse [that was] red (communism): and [power] was given to him that sat thereon to take peace from the earth, and that they should kill one another: and there was given unto him a great sword.

(Speaking again about the Two Witnesses:...The gentiles rightly judged the "tree" by the fruit it bears and were revolted by the actions; greed and injustice of the political systems of the Two Witnesses and therefore these peoples; multitudes; nations and tongues/languages (waters - Rev. 17 v 15) were turned to blood (red - communism). Away from God to Satan. They were DRIVEN to communism by the actions of the Two Witnesses because the two witnesses have done to them whatever they liked, as often as they willed (wanted) - Rev. 11 v 6.

Now we come to the second of the four horsemen "And there went out another horse that was RED: and power was given to him that sat thereon to take peace from the earth, and that they should kill one another (the red and white horsemen): and there was given unto him a great sword."

Karl Marx, the human and "visible" author of communism, working for his master Satan, claimed that he had been given a sword by Satan and he would drag God down from heaven and defeat Him with it...)

King of kings' Bible, Revelation
13:11 And I beheld another beast coming up out of the earth; and it had two horns like a lamb, and he (Hitler) spoke as the dragon.
13:12 And he exerciseth all the power of the first beast before him, and causeth the earth and them which dwell therein to worship the first beast, whose deadly wound was healed.
13:13 And he doeth great wonders, so that he maketh fire come down from heaven on the earth in the sight of men,
13:14 And deceiveth them that dwell on the earth by [the means of] those miracles which he had power to do in the presence of the beast; saying to them that dwell on the earth, that they should make an image to the beast, which had the wound by the sword, and did live (the Roman Empire - eagle and swastika emblems).
13:15 And he had power to give life unto the image of the beast, that the image of the beast should both speak, and cause that as many as would not worship the image of the beast should be killed.
13:16 And he causeth all, both small and great, rich and poor, free and bond, to receive a mark (Deutsch) in their right hand, or in their foreheads (Marx-ism):
13:17 And that no man might buy or sell, save he that had the mark, or the name of the beast, or the number of its name.
13:18 Here is wisdom. Let him that hath understanding count the number of the beast: for it is the number of man (created 6th. day); and its number [is] Six hundred threescore [and] six (man, man, man).

In his poem entitled The Player, Marx penned these words:

“The hellish vapours rise and fill the brain, till I go mad and my heart is utterly changed.
See this sword? The prince of darkness sold it to me.”

The above is just to offer a glimpse of what this is all about. For a much more complete explanation and about what Prophecy says is going to happen very soon, read "The Four Horsemen" article as well as other articles found on JAH's website.

A long, but very thorough and very informative article (which contains much more information about communism as well as who created it - the creators of communism were - capitalists!) about the Illuminati and their conspiracy to try and create a one world government ruled over by them can be found at: 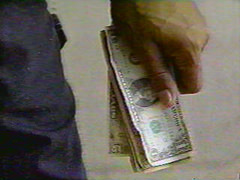 At the end of the day, things however are not going to keep going the way that "they" want, because even though they plot and have made plans, God also plans, and God is the best of planners, not them.