Man Receives a Heart From a Gene-Edited Pig The gene-edited pig heart recipient, who was ineligible for a human heart transplant, is doing well three days after the surgery. University of Maryland School of Medicine Doctors have successfully transplanted a pig heart into a patient in a last-ditch effort to save his life. The highly experimental surgery marks the first time a gene-edited pig has been used as an organ donor for a human and provides hope to the hundreds of thousands of Americans in need of organ transplants. Three days after the surgery, doctors report the 57-year-old Maryland man and his new heart are doing well.
“It creates the pulse, it creates the pressure, it is his heart,” says Dr. Bartley Griffith, who performed the operation at University of Maryland Medical Center, to Roni Caryn Rabin for the New York Times. “It’s working and it looks normal. We are thrilled, but we don’t know what tomorrow will bring us. This has never been done before."
The heart recipient, David Bennett, agreed to be the first to undergo the eight-hour surgery knowing there was no guarantee the experimental heart would work. Bennett, who is ineligible for a human heart transplant because of his heart failure and an irregular heartbeat, said he was without other options, reports Carla K. Johnson for the Associated Press. As of Monday, Bennett was breathing on his own while still connected to a heart-lung machine to help his new heart.
When Bennett told his son that he’d opted to receive a gene-edited pig heart, “at first I didn’t believe him,” says David Bennett Jr. to the Times. “He’d been in the hospital a month or more, and I knew delirium could set in. I thought, no way, shape or form is that happening.” After seeing his dad’s successful transplant, Bennett Jr. says, “this is nothing short of a miracle.” 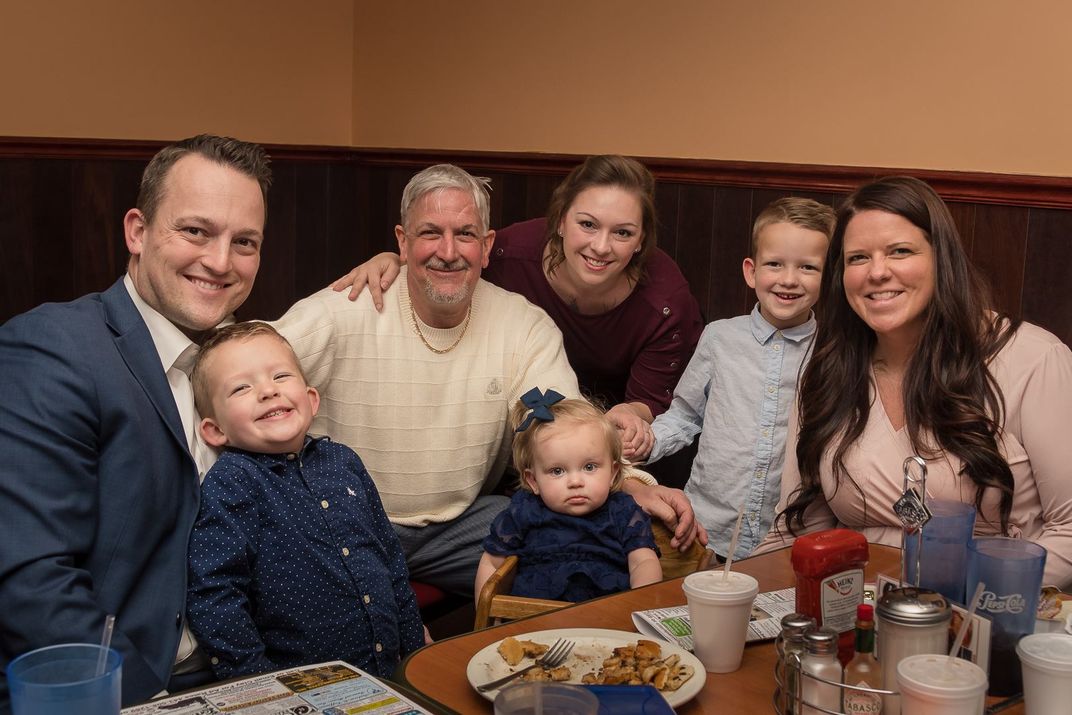 The heart recipient, David Bennett Sr (in white), and his family pictured in 2019. David Bennett, Jr.
Bennett’s transplant demonstrates that a heart from a genetically modified animal can function in the human body without immediate rejection. It may be months before doctors know if the heart will help Bennett long-term, but they are optimistic that the technique could be used for more life-saving transplants in the future.
Tens of thousands of Americans receive transplanted organs each year, but there is a shortage of organs for those who need them. There are over 100,000 individuals on the national transplant waiting list, and around 17 people die each day waiting for an organ. That has motivated scientists to develop animal organs that wouldn’t be rejected by the human body, and with advances in gene editing, the operation was finally possible. The landmark heart transplant comes after doctors temporarily attached a kidney from a gene-edited pig to a deceased human body last September. 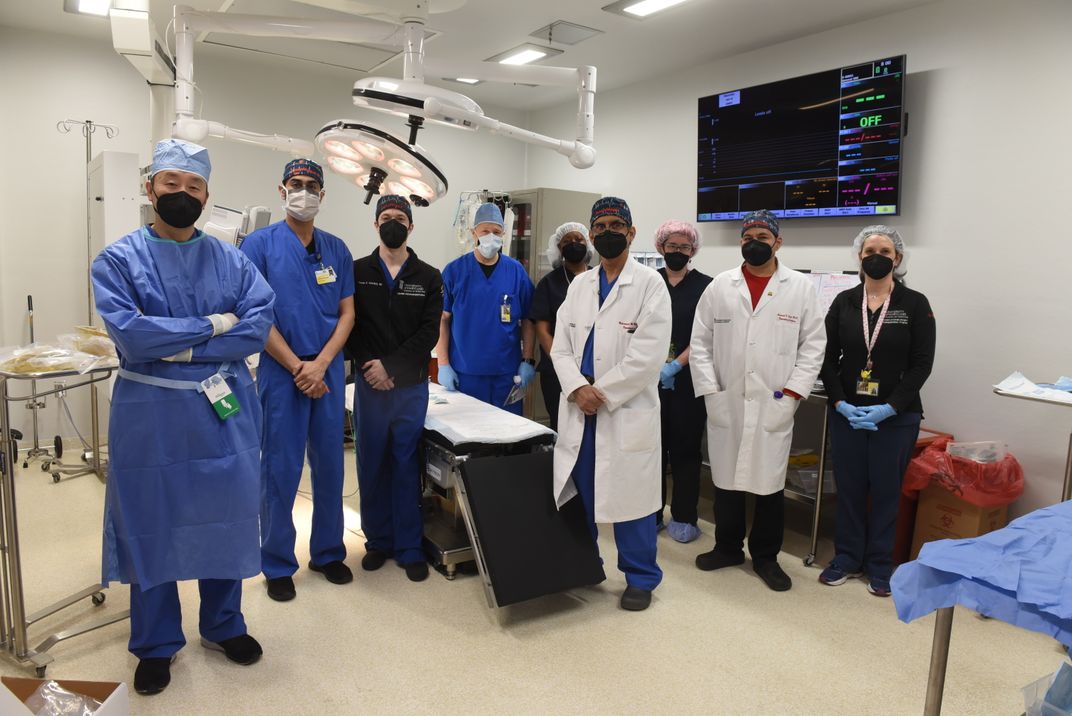 The eight-hour operation took place in Baltimore on Friday, at the University of Maryland Medical Center. University of Maryland School of Medicine
Bennett’s donor was a one-year-old, 240-pound pig gene-edited and bred specifically for saving his life, reports USA Today’s Karen Weintraub. Doctors opted to use a heart from a pig rather than another animal because pigs are easy to raise and their organs reach human size in just months.
To make the heart suitable for Bennett, the porcine donor had to undergo a series of genetic modifications. Four genes were deleted from the pig’s genome, including one linked to rapid organ rejection, and one to prevent the heart from continuing to grow after it was implanted. Six human genes designed to make the organ friendlier to Bennett’s immune system were also added into the genome of the donor pig.
“This is a watershed event,” David Klassen, the chief medical officer of the United Network for Organ Sharing and a transplant physician, says to the Times. “Doors are starting to open that will lead, I believe, to major changes in how we treat organ failure.”

My sister told me about this the other day and I was immediately disgusted. Whether this works or not, to me, it still seems quite literally inhumane and I just...I'm just not onboard with it.

I don't think we should mix species at all.

I don't think we should mix species at all.
Click to expand...

Isn't this referring to sexual acts with animals?

Pulling Back The Curtain said:
Isn't this referring to sexual acts with animals?
Click to expand...

It is, but still. Who wants to have an animal heart inside of their body?

Someone scared of death who would die if there were no available human hearts at the time to transplant, I would guess. I accept it is a weird concept though.

Here's something similar which is kinda gross:

Oceanic said:
It is, but still. Who wants to have an animal heart inside of their body?
Click to expand...

someone who wants to keep living.

i have mixed feelings about this, but look at it from a parents point of view as if your child was dying.They would most likely to anything to save them.

MP3D said:
i have mixed feelings about this, but look at it from a parents point of view as if your child was dying.They would most likely to anything to save them.
Click to expand...

There was actually a book written about this scenario a couple of decades ago - https://en.wikipedia.org/wiki/Pig_Heart_Boy