....until I backended myself into this report, from Spain, I had no idea that the Catalonians are similarly protesting their central government, and that there is developing a sort of 'kindred spirit' between Hong Kong and the Catalans....
...both being violently oppressed/suppressed... and each 'sporting' each other's flage in solidarity? who knew? 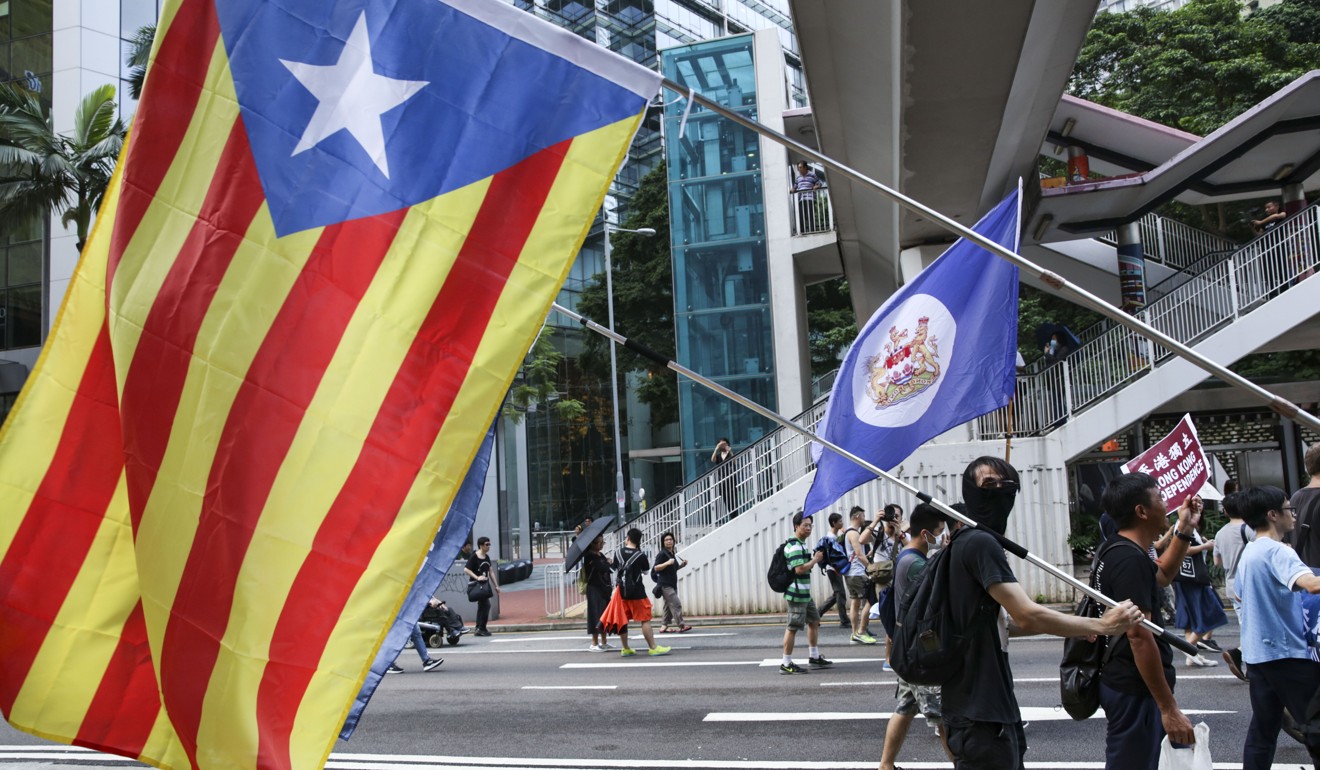 A Catalonian pro-independence Estelada is waved alongside a Hong Kong colonial-era flag as some protesters in the city express their feelings about Chinese rule. Photo: Sam Tsang

“I’m very disappointed with the EU,” Puigdemont said, speaking in the Belgian town of Waterloo. “Obviously, we didn’t expect clear support from a European institution, but we expected [it to voice concern] if fundamental rights were violated.”

Chinese officials claim the differing treatment by European politicians and media of the two movements is an example of double standards and “Western hypocrisy”.

“So-called democracy and human rights is only an excuse with which the West interferes with Hong Kong affairs,” Chinese foreign ministry spokeswoman
Hua Chunying said

. “There should only be one standard and one stance on violence and illegal activities.”
Another significant difference is in how the movements have been led. Puigdemont once led a Catalan government that unilaterally held a referendum on independence without Madrid’s approval. His successor, Quim Torra, also a pro-independence figure, was sworn in as Catalonia’s president after months of direct rule by Madrid. This contrasts with Hong Kong’s movement, which has no clear leadership and was initiated by those on the political fringes.

Catalan protests fuelled by ‘chaos’ in Hong Kong, Chinese ex-envoy says
Both of the movements failed to win support from the rest of the country. Ask Spaniards outside Catalonia, and most of them would belittle Catalan independence as a “fake issue”. “Our shared history [Catalonia and Spain] is long and deep,” Rafael Arenas Garcia, an activist against Catalan independence, wrote in The New York Times. “Catalonia has been an integral part of Spain since the nation’s inception.”

Mainland Chinese following the Hong Kong protests – whether they live on the mainland or in Hong Kong – tended to see them as the work of secessionists trying to break away from the rest of China, even though the claim is repeatedly denied by the protesters.

The mainland public’s suspicion was only deepened by the frequent appearance of anti-China messages and one of the movement’s slogans, “liberate Hong Kong, revolution of our times”. Given the rising nationalist tides in China, any movement perceived as “separatist” would quickly lose public sympathy.

The Spanish and Chinese governments are equally vocal in trying to engage overseas media regarding the protests. 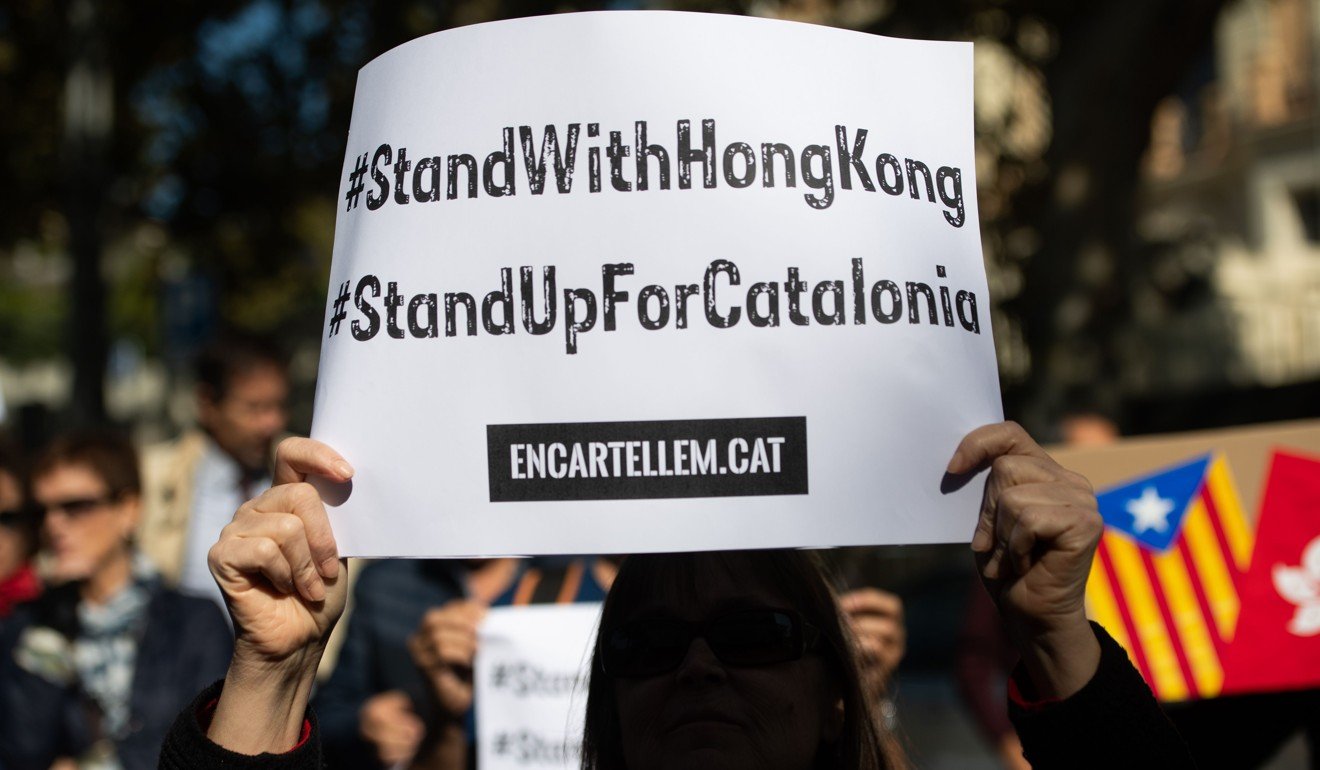 Placards and slogans used during demonstrations in Barcelona reveal the empathy between the two movements. Photo: AFP

Spain’s socialist Prime Minister Pedro Sanchez, his ministers and the country’s most senior judge have cited heavily The Economist’s latest democracy ranking, which puts Spain ahead of the US, France and Italy, as they wage a PR battle against Catalonian leaders.

Sanchez’s ministers have bombarded the international media with briefings, interviews and opinion articles defending Spain’s reputation, and provided reporters with a bounty of data, according to news magazine Politico.

The same has been seen from Beijing, whose foreign diplomats in the US and Europe have defended the Hong Kong government’s actions against the protesters since June. They, too, like to cite international statistics to support their assertion that Hong Kong’s rule of law remains in good shape.

While the protesters of Catalonia and Hong Kong might be sharing tactics and moral support, Puigdemont said there was little the Beijing government could learn from its Spanish counterparts.

“My advice to the authorities is to respect fundamental human rights,” he said.

This article appeared in the South China Morning Post print edition as: Protest movements with more than a shared style?

The whole protesters thing makes me believe that indeed general population can be really powerful.

And they’re back....
Flash mobs break out in Hong Kong as anti-government protests resume following forced period of calm due to coronavirus 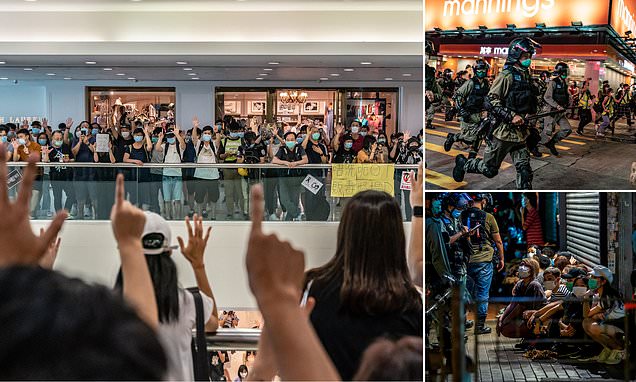 Who knows how long this will be viewable.

Hong Kong never stood a chance to remain free after the UK gave them back.

Why I've fled my home in Hong Kong aged 26 to keep fighting the tyrants of Beijing: A rousing message to the world from a young leader of the pro-democracy protesters bravely defying China 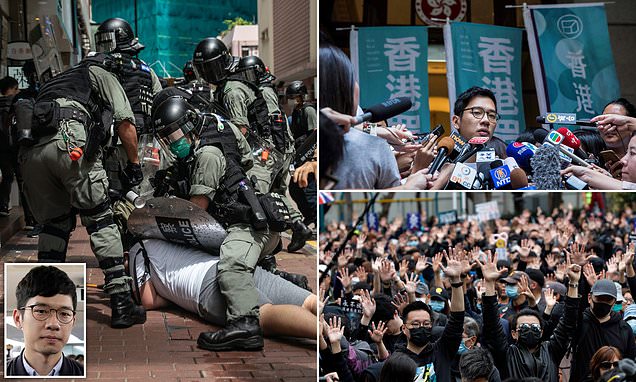 Message from a leader of the pro-democracy protesters defying China

I was bidding farewell to Hong Kong. But like other activists fighting for democracy, I knew I would be targeted by communist leaders in Beijing under a sweeping new security law, says NATHAN LAW. 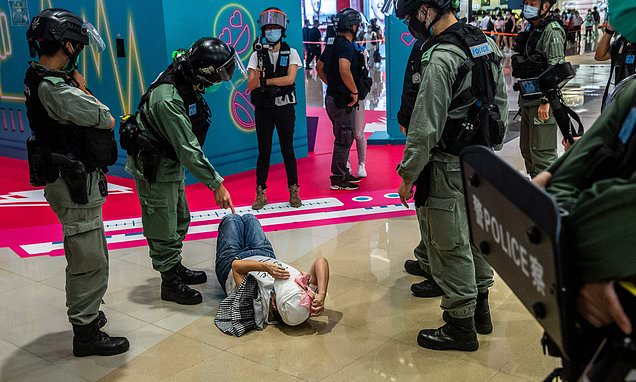 Hong Kong police officers now also have the right to ban suspects from leaving the city, confiscate their assets, conduct secret surveillance and intercept communications, according to the law.

I see the hypocrites on here supporting Hong Kong protesters while demonizing BLM.