Karlysymon said:
In the last two days, I’ve seen 2 Daily Mail articles talking about protests: one in Paris for solidarity with the Austrians and the one about Germany making vaccinations compulsory and protests erupting in Europe. So I thought that was really odd that they would be reporting on them.

I did a search to see if other mainstream outlets were reporting on the protests and lo and behold, they are!
View attachment 65655

I really do think that there may be truth to this stuff that seekinheart posted. So MSM completely ignored and failed to report on previous protests and are now doing an about face? Why? If they didn’t want you in the streets before, why do they want you there now? Do they, perhaps, want you to bring down your own government so that “someone” else swoops in with a ready-made solution? Are we assume that we will see a Gladio redux (protestors start to suddenly find weapons caches….think George Floyd bricks)? Could well-meaning people be walking into a trap or are they plants??

My guess is that their activity surveillance software has told them it is time to go in trying to control the narrative.

We discuss the ongoing crisis that has severed major supply routes linking west coast Canada with the rest of country. The main port in vancouver (where most imported products originate) can not have goods shipped by rail or through the rocky mountains due to bridges, highways and railway systems being washed away. A major crisis is developing.

MagneticHuman said:
What does going into the age of aquarius really imply?

Just as the captured human minds are breaking free. The water will be harder and harder to control. It's all connected.

It may seems catastrophic (and to some it will be) but it's all nessecary to break down the construct holding all of creation down. This is nature doing its part so that we can build back better.
Click to expand...

Build back better? Where have I heard that before? If that's a joke it's not funny.

DavidSon said:
I liked the article from Sayers, he has a good spirit. Look how much has changed in just 2 days! After all the talk they're making the injections mandatory. It's bad news but I laughed at the 1st headlines- like we didn't know 1.5 years ago what all this was leading to.

@Karlysymon will get a kick out of this quote- another nudge :

"The Austrian Chancellor Alexander Schallenberg openly explains that the policy is a heavy-handed “nudge”: “My aim is very clear: to get the unvaccinated to get vaccinated, not to lock up the unvaccinated,” he told ORF radio station."

Like I said I guess a lot can change in 2 days. Our officials' words are as trustworthy as a PCR test. Speaking of tests we have to remind ourselves that "cases" are a lie. Masks and social distancing don't stop transmission of any sickness... their gene therapies certainly don't. Convid is a fabricated tool for the domination of mankind, simple as that. Sayers summed up his article and the situation properly; the comment on the endemic nature of the illness is the same as Dr. Malone's opinion:

"It would be hard to think of anyone less threatening or extreme than Mia and Chris. Alternative, certainly; anti-establishment, yes. But good people who in any healthy, confident culture would be cherished and celebrated. Allowing them, and millions like them, to drift into a caste of untouchables, separated from the mainstream, all for the sake of a marginal gain against a virus that is rapidly becoming endemic, may prove to be a grave miscalculation with effects that will be felt for years to come."
Click to expand...

It’s maddening to be honest but I guess it shows the influence of the shadowy nudge units that no one can see directing policy on behalf of their paymasters. Interesting to me was the use of the phrase ‘we’ll lockdown based on hospitalization rate’ in different countries because you may remember that this was the exact plan laid out in that March 17 2020 MIT article. Take note of the charts

We’re not going back to normal

Social distancing is here to stay for much more than a few weeks. It will upend our way of life, in some ways forever.

www.technologyreview.com
The orange line is ICU admissions. Each time they rise above a threshold—say, 100 per week—the country would close all schools and most universities and adopt social distancing. When they drop below 50, those measures would be lifted, but people with symptoms or whose family members have symptoms would still be confined at home.

This isn’t a temporary disruption. It’s the start of a completely different way of life.

(vaxx logic carousel: vaxx people, weaken their immune systems that they end up in hospitals. Rising numbers of that is used to justify lockdowns to get the unvaxxed to take the shot who will also end up in hospital contributing to increasing hospitalization, then lockdown…..and on, and on.)

It’s all mind games to them. For example: Ontario’s Doug Ford said he’ll lift all restrictions in March next year but at the same time, Canada contracted with Pfizer for shots through to 2024(?). You wouldn’t enter into the contract unless you have a plan to force people to take the shots somehow. Then the UK “leaked” its “Operation Rampdown” on lifting restrictions and other covid costs but it also (if I remember correctly) had a budget for it’s “covid police” up to 2023.

Just following orders said:
I think I’d be more surprised if the world still exists in 2028, tbh
Click to expand...

I think so too. I think that the people at the very top, who give out the orders that filter down to public faces like Gates, are fully aware that they are on a suicide mission. They merely put out these glorious utopian dreams of life in 2040 or 2050 just to get other minds on board to carry forward their suicidal plan. We are currently undergoing an experiment on all fronts and we don’t even know the full implications of that, come 2030.

For example, when Rockefeller was building his oil empire, he certainly may not have anticipated the impact of petrochemical substances on fertility, hormonal balance etc. Now you have people shedding the spike protein, obviously ending up in the water supply and possibly immediate water bodies like rivers. What will be the impact on that biodiversity? What if those animal populations collapse within 5years? Iam sure this has already been gamed out by “them”, so they know.

While they are already asking how dogs would adapt to a post-human future, what would a post human future truly look like? Ofcourse these people aren’t privy to God’s plans but may be, like Caiaphas, you may say or plan to do something when, unwittingly, your timetable is right on the mark. So may be the “covid program [truly] does end in 2025”….and they haven’t even started “properly” messing with the weather....to "displace 1 billion people by 2030".

Frank Badfinger said:
This same scenario has played out time and time again. There is no doubt in my mind that most, if not all, of the violence and fires being started are being done by agent provocateurs.
Click to expand...

TempestOfTempo said:
A good metric to gauge if the protests are legit or not are the reactions of the elites and their proxies (cops, politicians, media and etc.)...
If they react with "This is really scary, lets tell you how scary it all is" with (credit to Don Henley) "A gleam in their eye" and bring in a bunch of "experts" who alternate from serious and stern warnings to smiling assurances while talking all over each other and sporting perma-grins... it kinda speaks for itself.

If they have that terrified, deer-in-the-headlights look and are anxious to let whatever talking head the network has brought in to direct the programming set the tone and narrative... lets just say they get shook for a reason eh?
Click to expand...

It is all calculated to evoke a response. “They” are purposefully getting people raving mad e.g with the compulsory vaxx rules and “they” are anticipating a revolt. I’d posted this in my climate thread.

Interesting timeline....while a 20yr span in the document, its probably meant to fit within this decade

I wouldn’t be surprised at all if European gov’ts go first (because that sets the trend). Iam just saying that if you are in the street overthrowing your gov’t, be mindful of the ready-made solution that will presented (world federal gov’t) and not accept it because the “other side” is playing a well calculated game. 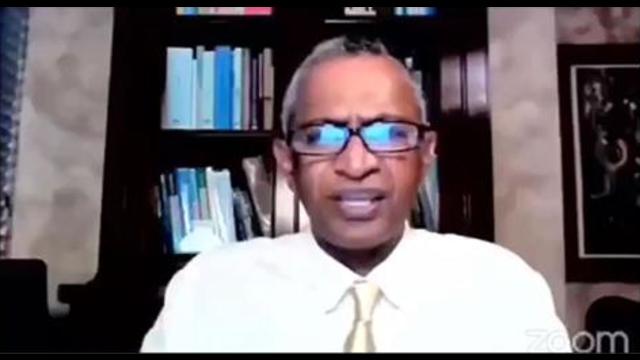 Dr. Chetty is a general practitioner with a natural science background in genetics, advanced biology,microbiology and biochemistry. https://www.bitchute.com/video/IQoUmvcoiStX/

Dr. Chetty is a general practitioner with a natural science background in genetics, advanced biology,microbiology and biochemistry. https://www.bitchute.com/video/IQoUmvcoiStX/

It seems like this gives the government the power to put away anyone they don't like in a concentration camp by saying they tested positive for covid. This is worse than Nazi Germany because Hitler didn't work against German citizens just other countries citizens. Australia is working against their own citizens.

We would be Australia if it wasnt for the 2nd amendment and states rights. Now its a race. They have to take us down before everyone wakes up.

Lizard King said:
It seems like this gives the government the power to put away anyone they don't like in a concentration camp by saying they tested positive for covid. This is worse than Nazi Germany because Hitler didn't work against German citizens just other countries citizens. Australia is working against their own citizens.
Click to expand...

Enighten me against what countries citizens did Hitler ''work" ? He went against globalists,colonists and other zio-scum who won the war and continued to r4pe the planet and build their NWO.
Most peope still believe hollywood version of history and cant really blame them- WW2 propaganda never stopped...

You're most certainly welcome. Thank you for starting this very important thread.

Bubbajay said:
I never understood the poopie and fart jokes the far right has resorted to. Politics is devolving like everything else.
Click to expand...

Not American, and jokes aside, from my point of view, this stuff is important. I personally don't, but many people look at the likes of Biden or Erdogan as powerful people, and making them look like complete jokes is part of the whole control over all agenda.

FilthPig said:
Enighten me against what countries citizens did Hitler ''work" ? He went against globalists,colonists and other zio-scum who won the war and continued to r4pe the planet and build their NWO.
Most peope still believe hollywood version of history and cant really blame them- WW2 propaganda never stopped...

Poland and Czechoslovakia, Russia, Denmark, Belgium and then pretty much the whole world. Doctor Morrel had him so pumped up with drugs that he somehow thought attacking Russia was a good idea. My point was that he was fighting for his own people and he was for Germany because he was a nationalist. Australia is attacking their own people so they are worse than Hitler.

I also find it ironic that Austria which is the birthplace of Hitler is now forcing mandatory vaccines on it's own people.

Sadly, she has no problem with the jabs.
Houston Methodist doctor resigns following suspension for treating patients with Ivermectin.

Trudeau did the same thing.

CDC and Big Pharma Data Shows that More Children will Die from COVID Vaccine than from the COVID Virus
The world has gone mad. We knew when ‘experts’ decided to vaccinate children that there would be more deaths from the vaccination than from COVID. Now we have support for this based on CDC and Big Pharma data. The world has gone mad. We knew when ‘experts’ decided to vaccinate children that there would be more deaths from the vaccination than from COVID. Now w