justjess said:
This whole situation is clearly effecting everyone differently. Our business is booming atm because people are snatching up houses in the woods (fleeing nyc) sight unseen and then needing the whole house remodeled - since were from ny, nj they trust us I guess so we’ve got more work then we can even handle right now. The start up hasn’t launched yet but completely coincidentally fits right in line and is a tech solution for social distancing guidelines So I’m assuming that is going to go well at launch too.

But my personal day job - my hours have been cut to practically nothing which means my raise, benefits and clinical supervision hours for licensing are on hold and if school doesn’t go back in person that hold will be for the foreseeable future. Which is frustrating and inconvenient as hell and if it was my only income would be a ginormous problem. The apartment next door (We live in a duplex and manage the property) has been vacant since April because we can’t rent it because no one has any money.

I think it’s probably smart to keep in mind that this situation has played out very differently for different people and everyone’s opinions/attitudes about it are going to be shaped by their personal experience. sorry if that’s off topic.. it was just my stream of thought on the matter right now.
Click to expand...

I'm glad your personal businesses are working out. I think you'll enjoy them more than your chosen field. You're right about it being different for everyone, work/financial has been stellar for me this year...everything else has sucked donkey balls.

Lisa said:
And they think that all that will force the warmongers to change? Or are they just hurting themselves?
Click to expand...

I guess people have been passive for so long, only complaining without ever doing anything about it. So they just had some of their steam blown I guess. I don't believe anything amounted from the protests, but at least it made people realize that things cannot go on like this and it gave them the illusion that they were united against the elite despite them belonging to different religions and political parties. They were peaceful protests anyway, mostly singing and dancing to patriotic songs or chanting some silly offensive stuff against politicians. So they had their fun!

ClaratheStrange said:
I guess people have been passive for so long, only complaining without ever doing anything about it. So they just had some of their steam blown I guess. I don't believe anything amounted from the protests, but at least it made people realize that things cannot go on like this and it gave them the illusion that they were united against the elite despite them belonging to different religions and political parties. They were peaceful protests anyway, mostly singing and dancing to patriotic songs or chanting some silly offensive stuff against politicians. So they had their fun!
Click to expand...

Didn’t you say they blocked the roads..doesn’t sound peaceful to me..and shut down the country?

They only closed the main highway in some spots and there are many other roads, so people could still make it to wherever they want, they would just be late. Most of them were on the street anyway at the beginning and basically our infrastructure sucks so even a road accident or a bit of rain and the country is paralyzed. I did feel bad for the shops that closed temporarily, but the economy was going downhill anyway and no one was in the mood to be spending money. I personally consider this whole thing to have been peaceful, but it may not seem that way to everyone. Anyway don't want to derail the subject of this thread any further!

It might've been strategy in light of the GAFA hearing, but it doesn't take away from the effectiveness of hydroxychloroquine, speaking of which:
Where's your evidence for this?
Click to expand...

supported by right wing, therefore politically motivated and a sensationalized version of the truth, which I already broke down in a response to Lisa.

Frontline doctors may as well be a campaign brochure.

“These are the doctors diagnosing, treating and helping patients beat COVID-19," said Jenny Beth Martin – co-founder of Tea Party Patriots, a pro-Trump conservative group that helped organize the event – during the news conference.”

'America's Frontline Doctors' may be real doctors, but experts say they don't know what they're talking about

The group made false claims about coronavirus cures. Their specialties and experience suggests they were offering little more than personal opinions.

winning the November election is far more important though.

"Holy hell. Jared Kushner reportedly abandoned a national testing plan because it was *politically advantageous* to sit back and let blue states be eviscerated by the virus."

winning the November election is far more important though.
Click to expand...

Lol...why would trump want to wreck his awesome economy? So he could win re-election?

The economy is trashed. All the stimulus checks, small business loans, and FED quantitative easing did next to nothing. It's just mind-boggling how anyone in the government thinks 1,200 dollar stimulus checks will move the needle at all. Basically there will never be a V-shaped recovery. Mainly because a V-shaped recovery would involve the public getting more than a measly 1200 bucks.

Let's call a spade a spade. There's nothing in the cards to suggest America will get anything besides what I'm calling a "Trickle-down recovery". For the right-wing sycophants, that probably sounds perfect. But it's literally the most tone-deaf illogical shit to happen in the 21st century. The only hope the public has right now is whether or not we are at rock bottom.

If the economy is at rock bottom, we can only go up. 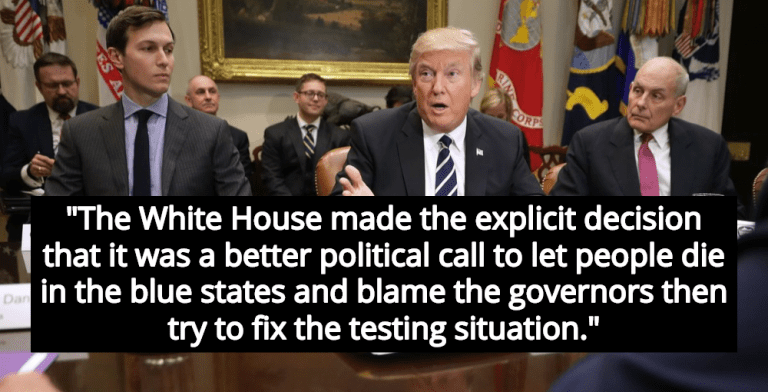 Crimes Against Humanity: An explosive investigative report shows that the Trump White House abandoned a national testing plan earlier this year “because

“In the case of Mexico, where they are already working on the development of an edible vaccine in tomato plants against COVID-19..” While large companies and public sector consortiums in the United States, Canada, China and Europe are running at full speed to develop a vaccine grown in genetically modified (GM) tobacco plants, a research group at a Mexican university is working toward the same objective, but with a different...

Even if a company like moderna is successful in producing a vaccine, how does this translate to requiring a place like Mexico to take this particular vaccine?

if Mexico does take this vaccine, how would they be required to stop their own research on edible vaccines?

if there is no reason to stop their research of an edible vaccine, why would they be forced to continue taking the bill gates approved vaccine if this endeavor was successful?

What i see happening is that the us is not going to be considered a leader in innovation after this and this might cause a major shift in power. Although, I don’t see how it is possible to unify anything close to a universal government unless there is a lot more force enabled than the presence of the virus. It is just not a strong enough force to accomplish something like this on its own even with the effect it has had on the economy. At some point, I also don’t think it will ever be possible, if technology continues to advance and produce something like an edible vaccine.

Something like an edible vaccine would create an economic shift in healthcare too. There is the potential to replace some pharmaceuticals the same way Walmart replaced sears. There is even the potential to downsize healthcare entirely if people could grow their own vaccines. It is not something you could stop if it were a plant either the same way no one has stopped growing marijuana even though it was illegal in many places for a time.

edible vaccines create fascinating opportunities to change many predictions that are regularly made around here.

Naw, that was outsourced along with all the manufacturing jobs.

Lurker said:
Naw, that was outsourced along with all the manufacturing jobs.
Click to expand...

I was talking to an old member the other day and they remembered a situation in an army lab not to long ago. Can’t remember the name tbh.

justjess said:
I was talking to an old member the other day and they remembered a situation in an army lab not to long ago. Can’t remember the name tbh.
Click to expand...

I believe that’s the one. Yes.

maybe I’m jaded idk.. but it’s seemed to me and has for months now that this has America written all over it. Release it, frame China, kill off all the social security recipients at the same time. Win/win for these sick fucks. I’d consider other culprits except America seems to be the only ones welcoming death and doing not very much to stop it.

they were closed last summer and then allowed to reopen around the same time that Covid became a thing?

It bugs me to have to admit when Fox News makes good points about the COVID-19 lockdowns. Damn, that thing called logic. But really I don't miss being 1-sided like I was. Plus Fox News is still wrong about pretty much everything else.

The lockdowns and masks mandates just haven't been implemented well. The lockdowns especially have disproportionately had negative effects on every industry that doesn't politically lobby. Now I'm hearing about massive amounts of fraud in the COVID unemployment relief packages. Maybe it was the paycheck protection program, Idk it doesn't really matter because that's not the point.

The point is the American response to Covid-19 is a train wreck that's still barreling down a cliff. Basically, unless Superman or God shows up to bail these politicians out now, there's only one conclusion. Eventually, the pain will get to them and their families, and of course, it will be too late.