inquisitor said:
I'll give them another five months.
Heads up for january 2020,guys.
They will either enlist or throw a curve at fans.Either way,they are most likely to fade.
Just a personal opinion.Trolls who have a problem can take their business somewhere else.
Click to expand...

Their demise has already begun with this Saudi Arabia concert. I hope it turns into a disaster (not that anyone should get hurt or die) but SA ain’t no Dubai, concerts have been completely banned in the past. A Stadium pop concert by androgynous boy band will make controversial news in that country and the local reactions will be interesting to watch. I wonder if they will do the same thing Dagestan Russia did , but they will all probably be shut down or face the same fate as Khashoggi.

icecreamochi said:
You make no sense! Double talk. Are you like 12 years old? Good grief!
Click to expand...

no u. i didnt say i was a fan of him either, i hated him and nj the most out of all the other members, and i was shading at armys on how they call themselves their fans but still blinded and doesnt notice how mentally fucked up they are, if youre only here to give negative assumptions that you made up all in your head and jump to the conclusion that it is true, then sorry, i dont want to bother listening to you cause i believe you came here just to derail the thread by being rude, cause literally NO ONE is acting like a fan and having double talk here. i talked about how the members here cant be so soft for them and stop acting like armys like 100 times already, and you came here only to say that im one of them? sis are you ok?

Yes, and he also talked about that he ate pig (pork) and he himself is a pig. It was just bizarre to me.


Stina said:
Oh, you innocent soul, I almost envy you. Your mind can't even try to comprehend. Please stay like this
Click to expand...

Is there a particular reason to try to insult me or others? Cuz I am unbothered. Yes if he wanted to he could be found on tinder or whatever other app, but the weverse platform is a weird place to announce such things as it is filled (allegedly) by their teen female fans. So please if you're so wise, enlighten me with the purpose of the post being there.
I am sure they hook up with fans and random people why wouldn't they (hopefully they have some sort of sex life as they are in their mid 20s ffs)

And for others, nobody here is a die hard fan, but there isnt one way to look at things. I have stated about myself before, I do not wish seeing them get harmed, I am here to point out all the bad and the strange and be aware of agendas they promote. It doesnt mean I must hate on them along the way and it isnt hypocrisy in my opinion. Everyone here can say and act the way it suits them

also, weird how theyre creating a new game while their latest game is not successfull?

NotDelulu said:
Yes, and he also talked about that he ate pig (pork) and he himself is a pig. It was just bizarre to me.
Click to expand...

must be hinting at him eating human as part of his rituals or something, cause he eats pig and called himself a pig, cannibalism much?

The Statue of Liberty is actually a pagan goddess called libertas.
Click to expand...

True, but they are actually the same goddess -- just called by different names depending upon the civilization. Libertas is a goddess in the Roman pantheon. But she existed previously under the Greeks, who called her Astarte. They adopted her from a goddess in the middle east called "Ashtoreth" in Hebrew. The Hebrews actually got it from the Babylonians who called her "Ishtar". In Sumeria, she was called "Inanna". The Egyptians called her "Isis".

She was associated with freedom -- primarily the freedom to do anything that felt good (do what thou wilt). She is also associated with sexual freedom which is why Cicero called her the "mother of harlots". She was popular with slaves (who hoped to gain their freedom) and became the goddess of immigrants as well -- which made her a good choice for the statue of liberty with Ellis Island being the main point of entry for immigrants to the US. Apparently the Masons revere her and the French guy who designed the statue of liberty was a Mason, so naturally he chose her.

so weird...I posted about Netmarble stocks and they were going down because of this game lol
it looks like these people never give up, or Bang PD has a really strong contract with his cousin and he cant let go


https://twitter.com/i/web/status/1150442912007761926
I didnt kow they are still following Roy Kim (involved in Seungri sex scandal) hmmmmmm I wonder why. Are they friends? pay attention to that conection


https://twitter.com/i/web/status/1150442912007761926
I didnt kow they are still following Roy Kim (involved in Seungri sex scandal) hmmmmmm I wonder why. Are they friends? pay attention to that conection
Click to expand...

This. Isn't supreme boi like super problematic tho? At least that's what I heard idk what's the deal with him

inquisitor said:
I read somewhere that supr3meb0i has a lot of dirt on bigshit and the group.He is also rumored to be their drug supplier.Wonder what else he can procure though.
Click to expand...

hey!! just confirming if you sent me a private chat request yesterday
Because I got that notification....is it really you?

Pepsi said:
This. Isn't supreme boi like super problematic tho? At least that's what I heard idk what's the deal with him
Click to expand... 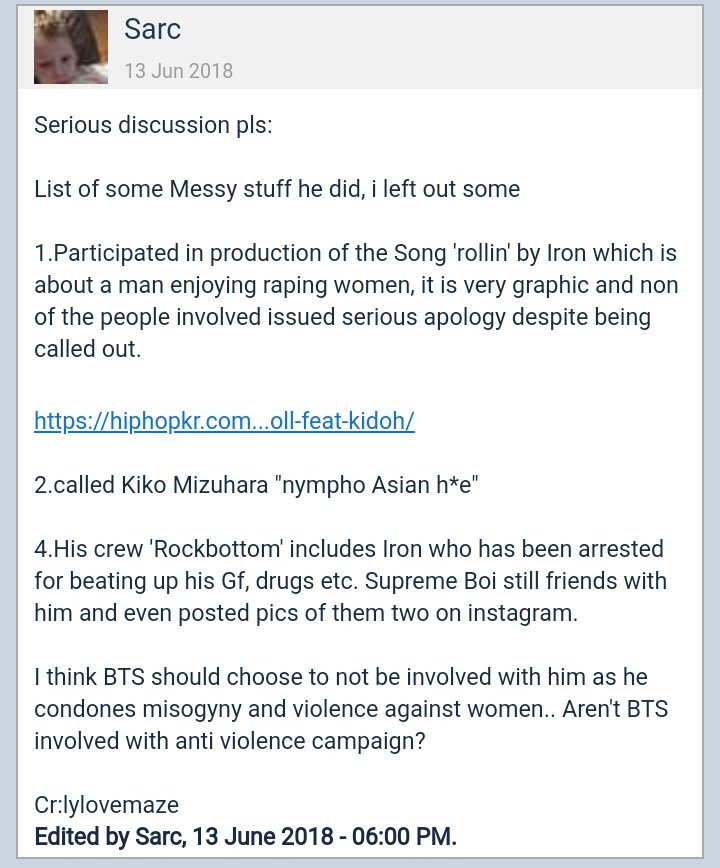 BTS work with him, he has a song with Jhope and he mentions Rockbottom (a crew of druggies and women beaters)

Here you can confirm it

just read it. I think you will be fine, but maybe start a back up account just in case. just name yourself Inquisitor2 and we will know its you

inquisitor said:
Are you aware that statue of liberty is on liberty island and not ellis island?It is a mandela effect for a lot of people.
Click to expand...

I did realize that they were on a separate island, but only because I visited there recently. I always thought it was on Ellis island up until a few years ago. I don't know if that is because I didn't pay enough attention in class or if it is a Mandela effect for me. I don't know what to make of the Mandela effect, to be honest. Some of them were really shocking to me (the bible ones certainly were) and I did think Mandela died in prison ... I don't want to get off on a tangent, but the whole Mandela effect thing kind of freaks me out

inquisitor said:
Actually,in thelema magick promulgated by crowley,same gender se* is considered to be of the highest and purest source of magic.According to their doctrine,now this is what I read from a practitioner's account,it seems se* makes magic potent.But,when the partners are of same gender,then,it multiplies the power by many times.Hence,they make it a norm for the high practitioners to participate in that.
They also think that a person has both feminine and masculine psyches (all that hermaphrodite and baphomet talk) and that one has to act the opposite gender once in a while especially while having relations with those of the same gender to increase the magick in oneself.And that this takes a lot of energy to actually play the psyche of the opposite gender.Hence,such practitioners are actually reveled.
I think all that crossdressing and acting gay is tied up into this line of thinking.
Which made me think that all the nwo agenda of lgbtqpiak movement is about making individuals who are supposedly magically potent without drawing any suspicion.
And then,using these magically amplified people in whatever rituals they are planning to do.
Click to expand...

... who are supposedly magically potent without drawing any suspicion.

I mean, that makes the most sense out of anything I've heard about the lgbtqpiak agenda. I used to think they were pushing their agenda to be accepted simply because so many of them are practicing homosexuals in high level occultism. But that is just part of it. What you said makes SO much sense in the grand scheme. They are pushing their agenda to put highly magical people in positions of power. Now I am scared ...

I Joined This Forums. cuz I thought This is Kpop forum. But The Only Thing I got is this discussion. I am just a fellow ARMY who wanted to talk and fangirl over the seven boys. (I don't have friends okay) (I have something to contribute) I love this video, and It has so many things. But The one thing that made me curious was, (What was The Story of Jungkook and Suga in Epilogue) (P.S Don't mind the edit, is just the scenes fit so perfectly with the music, I got goosebumps all over my body)

V_Hyungssi said:
I Joined This Forums. cuz I thought This is Kpop forum. But The Only Thing I got is this discussion. I am just a fellow ARMY who wanted to talk and fangirl over the seven boys. (I don't have friends okay) (I have something to contribute) I love this video, and It has so many things. But The one thing that made me curious was, (What was The Story of Jungkook and Suga in Epilogue) (P.S Don't mind the edit, is just the scenes fit so perfectly with the music, I got goosebumps all over my body)

sorry this is not a kpop forum, we are not fans, we are disussing the negative side of them.
Join instead Allkpop or Amino, there for sure you will fangirl and talk about them how much you want

@inquisitor I think you are right when you say the downfall of this group has begun. All the cracks are showing: from bored fans to extreme greed, flopped games and apps, that CDaN blind and the controversial Saudi Arabia concert. Today my sister who has known them for a couple of years and was a stan told me: ”bt5 are just gross”. I asked how come and she said they are so fake and boring. The new music is so bland. Yup this is their last year, the second half of 2019 won’t be as smooth as the first. I am ready for tea to be spilled, if ever. But considering that it has for all these other pop stars and especially Korean celebs, it is only a matter of time before their crimes and deception comes forward. Anyways the fakeness and greed is rubbing people the wrong way.

wow said:
str@y k@dz or nceetee definetly, they are already so big
Click to expand...

i think @teez has potential. they have had global fansigns. they went to kc on and performed for like 20 minutes. they also won 2 music shows idk how becuz apparently they arent that famous in korea.