Rev 20 1Then I saw an angel coming down from heaven with the key to the Abyss, holding in his hand a great chain. 2 He seized the dragon, that ancient serpent who is the devil and Satan, and bound him for a thousand years. 3And he threw him into the Abyss, shut it, and sealed it over him, so that he could not deceive the nations until the thousand years were complete. After that, he must be released for a brief period of time.


So the mark of the beast must first be implemented... before the resurrection of the dead in Christ and the rapture of the elect.

So the mark of the beast should be on the scene soon...

We're not afraid of virus... so you can take your vaccine and stick it.


We're afraid of God L0L. Not really but we're not afraid of you bozos.

Anybody afraid of anything... is truly not right with God.

Rev 13 7Then the beast was permitted to wage war against the saints and to conquer them, and it was given authority over every tribe and people and tongue and nation. 8And all who dwell on the earth will worship the beast— all whose names have not been written from the foundation of the world in the Book of Life belonging to the Lamb who was slain.

10“If anyone is destined for captivity,

into captivity he will go;

if anyone is to die by the sword,

by the sword he must be killed.”


Here is a call for the perseverance and faith of the saints.​

This is truly beautiful.


We got to compare scars with God himself.L0L

Operation Dark Winter was the code name for a senior-level bio-terrorist attack simulation conducted on June 22–23, 2001.

Rev 18 4Then I heard another voice from heaven say: “Come out of her, My people, so that you will not share in her sins or contract any of her plagues.

The problem with christendom today is that it has been infiltrated by ministers of righteousness who fleece the flock.

If only they fleeced the flock... but their doctrines are jeopardizing the salvation of the sheeple.

Jews are a peculiar people because God's Word was born a jewish man.


What do we know about God's Word or Logos ?


We know God's Word created everything.

The Creator on the cross. 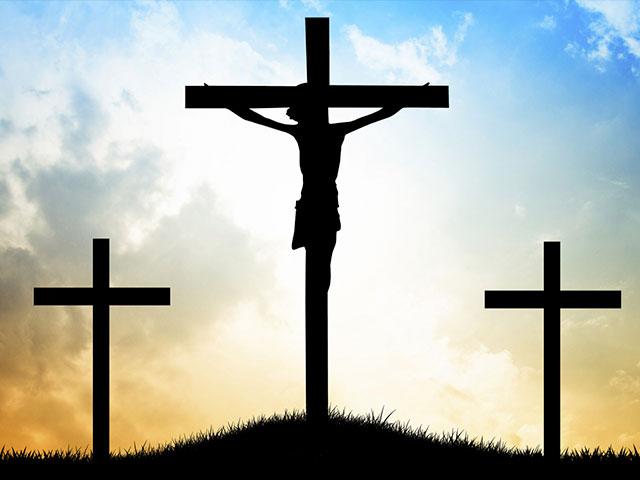 Cursed for man's sake and salvation.

Luke 24 44 Jesus said to them, “These are the words I spoke to you while I was still with you: Everything must be fulfilled that is written about Me in the Law of Moses, the Prophets, and the Psalms. 45Then He opened their minds to understand the Scriptures.

46And He told them, “This is what is written: The Christ will suffer and rise from the dead on the third day, 47and in His name repentance and forgiveness of sins will be proclaimed to all nations, beginning in Jerusalem. 48You are witnesses of these things.

I truly don't have a plan. And that's the truth.


Revelation 14 9And a third angel followed them, calling out in a loud voice, “If anyone worships the beast and its image, and receives its mark on his forehead or on his hand, 10he too will drink the wine of God’s anger, poured undiluted into the cup of His wrath. And he will be tormented in fire and sulfur in the presence of the holy angels and of the Lamb. 11And the smoke of their torment rises forever and ever. Day and night there is no rest for those who worship the beast and its image, or for anyone who receives the mark of its name.

12Here is a call for the perseverance of the saints who keep the commandments of God and the faith of Jesus.

13And I heard a voice from heaven telling me to write, “Blessed are the dead— those who die in the Lord from this moment on.

“Yes, says the Spirit, “ they will rest from their labors, for their deeds will follow them.

The Aurora, Texas, UFO incident reportedly occurred on April 17, 1897, when, according to locals, a UFO crashed on a farm near Aurora, Texas.[1] The incident (similar to the more famous Roswell UFO incident 50 years later) is claimed to have resulted in a fatality of the pilot. The pilot was "not of this world" and was said to be an alien.[2] The pilot was buried at the Aurora cemetery.[3] A stone was placed as a marker for the grave, but has since been removed.[4] 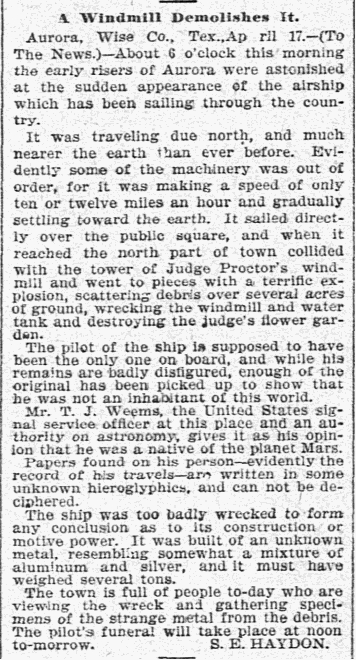 The Aurora Encounter is a 1986 American weird Western science fiction film directed by Jim McCullough Sr., written by Melody Brooke and Jim McCullough, Jr., and starring Jack Elam, Mickey Hays, Peter Brown, Carol Bagdasarian, and Dottie West. Its plot follows the residents of a small Texas town at the turn of the 20th century who are visited by an alien being after a UFO crashes in their town. The screenplay was based on the Aurora, Texas, UFO incident which allegedly occurred in 1897.


*Mickey Hays as the Aurora Alien. 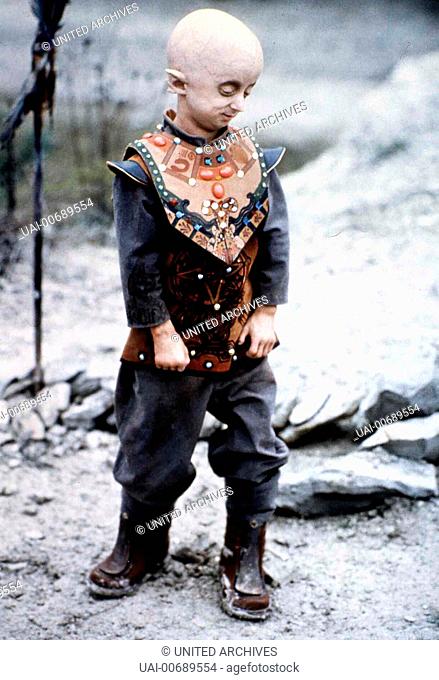 John 10 22At that time the Feast of Dedication took place in Jerusalem. It was winter, 23and Jesus was walking in the temple courts in Solomon’s Colonnade. 24So the Jews gathered around Him and demanded, “How long will You keep us in suspense? If You are the Christ, tell us plainly.