I think most muslims here know about an impending attack on Israel.

They might not know the date but terrorizing and trying to invade Israel has become an important part of muslim identity. They are determined to take back the land that belongs to the God of Israel and are not satisfied with the 45 or so muslim nations. They want that one Jewish nation as well no matter the cost to human life and property.

The god of islam encourages his imams who encourage millions of muslims to become terrorists.

How about just leaving that one jewish nation alone ? No not before every inch of stolen land is given back they say.

But that land belongs to the God of Israel ?! We will see about that they say...

Luke 18 7 And shall God not avenge His own elect who cry out day and night to Him, though He bears long with them? 8 I tell you that He will avenge them speedily. Nevertheless, when the Son of Man comes, will He really find faith on the earth?”


Jesus was wondering whether or not He will find faith when He returns to the earth.

That is a sobering thought.

He was warning about false teachers and Paul as well warned about apostasy and a falling away from faith during the last days... just before Jesus returns.


What is the right faith ?

Many will not make it.

Falling away from the right faith.

Seduced by spirits and doctrines of devils.


Are you in the right faith ?

What is the right faith ?


Sobering question. I love it.

To the One who made the earth and filled it with life... belongs all the power honour and glory.

Who is this One ?

And that's what man can't agree on... so we slug it out until last man standing or that One intervenes... like a lord of the flies or the Lord of all.

Can we all just get along ? he said before the riots began. No apparently not. We need help !


I Am Coming Quickly !

Who are you ?
I am the voice of one
crying in the wilderness.

Make straight the way of the Lord !​

People are born into religions and grow up to think their religion is right. This is natural.

But it is possible to prove which religion is right... but most are not interested to be proven wrong since their religion is a big part of their identity. And so they are willing to fight for their right to be wrong.

Jesus ministry began in Jerusalem on the following Passover after His baptism.

The first thing He did was to make a whip of cords and chase the merchants out of the Temple court. 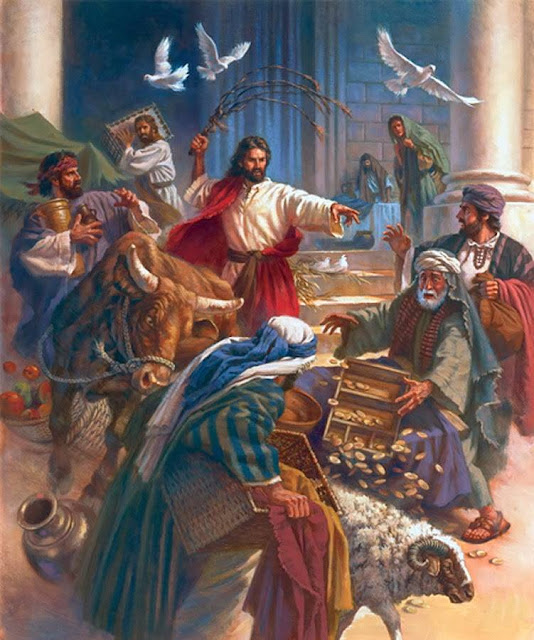 The Jews in Jerusalem might have known that something was not quite right for about half a year before Jesus came and cleansed the Temple precinct. For it is recorded in their Talmud that for 40 years before the destruction of the Temple the scarlet thread on the Day of Atonement never turned white again but remained red.

Just a couple of days before Jesus crucifixion while sitting on the Mount of Olives overlooking the Temple the disciples asked Him when and what signs would accompany the destruction of the Temple and His return at the end of the age.

The parable of the budding fig tree is remarkable because Jesus had just cursed a fig tree for not bearing fruit. And in another parable He had likened himself to one who for three years had been looking for fruit from a fig tree and found none but gave it one more year to produce or be cut down.

Matthew 24 32 “Now learn this parable from the fig tree: When its branch has already become tender and puts forth leaves, you know that summer is near. 33 So you also, when you see all these things, know that it is near—at the doors! 34 Assuredly, I say to you, this generation will by no means pass away till all these things take place. 35 Heaven and earth will pass away, but My words will by no means pass away.


There can be little doubt that the parable of the budding fig tree is the restoration of the Jewish nation state. And that the generation who would be alive and witness this restoration would by no means pass away...


(The Pulpit Commentary published in 1880 ends the commentary on this verse in Matthew 24:32 with a question... Did he intend to symbolize the revival of the life of the withered Jewish race in the time of the end?).

There are three sorts of people in the world.

So the angel Gabriel gave a timeline until the Messiah to the prophet Daniel.

Daniel 9 25 Know therefore and understand,
That from the going forth of the command
To restore and build Jerusalem
Until Messiah the Prince,
There shall be seven weeks and sixty-two weeks;
The street shall be built again, and the wall,
Even in troublesome times.


In the book of Nehemiah it is reported that king Artaxerxes of Persia gave the command to rebuild the wall in Jerusalem on Nisan in his 20th regnal year... which was between autumn 445 BC and autumn 444 BC according to Isaac Newton.

So seven weeks and sixty-two weeks from Nisan 444 BC until the Messiah.

But this timeline did not end with the city and the sanctuary destroyed by the people of the prince who is to come. Only sixty-two weeks were spent when the Messiah was cut off. There are still seven weeks and one week left.

The countdown was just paused until the command to restore control over Jerusalem went forth during the Six Day War on June 7 1967. So seven weeks (7x360 weeks) from that time completed on September 23 2015 the Day of Atonement.

So the prophetic timeline the angel Gabriel gave to the prophet Daniel over 2500 years ago has been proven to be correct. Whoever gave Gabriel that timeline not only knew precisely what would happen but exactly when the events would happen. This smells of God.

Daniel 9 27 Then he shall confirm a covenant with many for one week;
But in the middle of the week
He shall bring an end to sacrifice and offering.
And on the wing of abominations shall be one who makes desolate,
Even until the consummation, which is determined,
Is poured out on the desolate.


Well we're in the middle of the week.

We're here at the time of the end of sacrifice and offering and desolations from the wing of abominations.

Whatever that means... it's overtime for we are here in the middle of the week.

How can you call yourselves people of the Lord God if you've not been slapped by the baptist yet ?

TokiEl said:
What a bunch of brainwash !
Click to expand...

You can choose to let it add to your faith by being a bit more open minded, instead of choosing to take a fear based approach.

The Quran as rendered by the King of kings' bible has corrected the errors present in the popular Yusuf Ali translation of the Quran and should add to your faith not diminish it.

Sura
51:47. With power and skill did We construct the Firmament: for it is We Who create the vastness of Space.
51:48. And We have spread out the (spacious) Earth: how excellently We do spread out!
51:49. And of every thing We have created pairs: that ye may receive instruction.

bible_student said:
You can choose to let it add to your faith by being a bit more open minded, instead of choosing to take a fear based approach.

The Quran as rendered by the King of kings' bible has corrected the errors present in the popular Yusuf Ali translation of the Quran and should add to your faith not diminish it.

Sura
51:47. With power and skill did We construct the Firmament: for it is We Who create the vastness of Space.
51:48. And We have spread out the (spacious) Earth: how excellently We do spread out!
51:49. And of every thing We have created pairs: that ye may receive instruction.
Click to expand...

There is nobody here with understanding. I am all alone.

Gulf update. Iran not allowed to sell any oil so... the stage is set and they're begging for war.


BEIRUT, Lebanon — Charges that four oil vessels were attacked at the mouth of the Persian Gulf over the weekend have amplified fears across the region about the escalating tensions between Iran and the West.

The unconfirmed reports come as the United States has tightened sanctions against Iran and mobilized an aircraft carrier, bombers and an antimissile battery to the gulf to deter what the Trump administration has said is a heightened risk of Iranian aggression.

Isaac Newton wrote a treatise on Daniel and the Apocalypse.

Here is an interesting part taken from Of the prophecy of the 70 weeks chapter x.

This part of the Prophecy being therefore not
yet fulfilled, I shall not attempt a particular interpre-
tation of it, but content myself with observing, that as
the seventy and the sixty two weeks were JEWISH
weeks, ending with sabbatical years ; so the seven weeks
are the compass of a JUBILEE, and begin and end with
actions proper for a JUBILEE, and of the highest nature
for which a JUBILEE can be kept : and that since the
commandment to return and to build Jerusalem, precedes
the Messiah the Prince 49 years ; it may perhaps come
forth not from the JEWS themselves, but from some
other kingdom friendly to them,

Therefore according to Newton's thinking one must countdown 7 weeks/sevens from June 7 1967.

So the prince who is to come in Daniel 9 whose people destroyed Jerusalem and the Temple could not come before Sept 23 2015 but had to come on or right after Sept 23 2015.

And he did right after even stating he came in his own name...

Daniel 9 27 Then he shall confirm a covenant with many for one week;
But in the middle of the week
He shall bring an end to sacrifice and offering.
And on the wing of abominations shall be one who makes desolate,
Even until the consummation, which is determined,
Is poured out on the desolate.”


The pope of Rome came in his own name on September 25 2015 and confirmed the global agenda or action plan called the Millennium Development Goals with the Sustainable Development Goals in the United Nations. This is history !

This means we are in the middle of the week already... where he will bring an end to sacrifice and offering. Exactly what that means i'm not sure but it might mean an end to true Christendom... that is true uncompromising Christendom will no longer be tolerated.

Also on the wing of abominations shall be one who makes desolate i interpret as nuclear missiles... as the prophet Zechariah was shown a vision of the curse of the flying scroll with the dimensions of a submarine launched ballistic missile.


So according to the Scriptures we are as i type this shite in the middle of the last week... that means we are just about out of time. There is no need to set a date as i don't know but we are for sure not talking years but months at best.