a great spin to be a lazy SOB.
"yeah man, i dont work all week so i can save the planet even more."

Working less would massively reduce our carbon footprint, and bring many other benefits besides 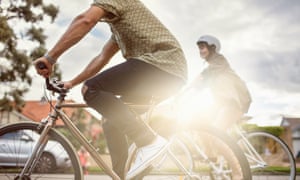 When the Extinction Rebellion protesters took to the streets, I was doubtful about how effective their tactics would be in creating meaningful change. Fortunately, I have been proven wrong. Following their protests, the public now sees the climate crisis as a pressing issue. According to a recent survey, nearly 70% of people in the UK want urgent action on the climate emergency. Many political leaders are listening. In one of her last acts as prime minister, Theresa May set the target of the UK achieving zero carbon emissions by 2050. Although the date for zero carbon could be much sooner, it is an important step in the right direction.
However, to achieve a more ecologically sustainable economy, changing minds will not be enough, we need to change behaviours. Small tweaks such as not using plastic straws or minimising food waste will make some difference. But if we hope to make real progress, we need to make bigger alterations in what we do. One behaviour change that will have a positive impact on the environment is a four-day working week.

According to a cluster of recent studies, working less is good for the environment. One analysis found that if we spent 10% less time working, our carbon footprint would be reduced by 14.6%. If we cut the hours we work by 25% – or a day and a quarter each week – our carbon footprint would decline by 36.6%. Another study found that if people in the US (who work notoriously long hours) worked similar hours to Europeans (who work much less), then they would consume about 20% less energy. A more recent analysis of US states found a strong positive relationship between the number of hours people worked and their carbon emissions. The more they worked, the more they polluted. Working a four-day week, rather than, say, taking more holidays or working fewer hours each day, was a great way of reducing your environmental impact. The exact magnitude of that reduction is unclear, but the research seems to point in the same direction: lowering the number of hours we work would help to reduce our impact on the environment.
By working less, we produce fewer goods and services that require precious resources to make. We also consume less in the process of getting our job done. Less work means less carbon-intensive commuting, less energy-sucking office space, and less time on power-hungry computer systems. In addition, working less would help to break down the work-spend cycle. Fewer hours at work mean we have more time to do other things such as travelling, preparing food or fixing broken household items. We are also less likely to rely on environmentally costly timesavers such as high-speed travel or takeaway food delivered in plastic containers by someone riding a motorbike.


Working less gives people a palpable short-term payoff of free time while benefiting the environment in the longer term​
But reducing the number of working hours would not guarantee a cut in environmental emissions. It could actually be bad for the climate if people used their newfound free time to do things which were more environmentally harmful. Instead of working, they could travel long distances on holiday or hit the shops. The good news is that there is some evidence that when people are given time off, they tend to gravitate towards low environmental impact activities. When France instituted a 35-hour working week in 2000, people developed less materialistic values and tended to use their free time with their families, resting or participating in sports or cultural events.
To ensure people choose activities with a low environmental impact, we need to provide an “infrastructure of conviviality”. That means good quality public facilities that allow people to use their time in fun ways that aren’t taxing on the planet. Examples of convivial infrastructure include parks, libraries, allotments, walking and cycling tracks, community halls and sports grounds.
Reducing the time we spend working would be welcomed by many. A recent UK poll found that 74% of people supported a four-day week. Experiments with the shorter working week dating back to the 1970s found that employees tended to be more satisfied with their job. More recent research has found that less time spent at work would also help to deal with other problems such as making work more accessible for women, reducing inequalities between overworked and underworked and making organisations more productive. A range of organisations including a small UK law firm, some public schools in the US and a New Zealand insurance company are experimenting with the policy.
As we struggle to find ways of making our world more sustainable, we need to identify innovations that give us tangible gains in the short term but are also good for the planet in the longer term. All too often measures to address the climate crisis seem too abstract, too distant and too painful. Working less is different. It gives people a palpable short-term payoff of free time while benefiting the environment in the longer term. A shorter working week could be one of those changes that is both great for the planet but also good for us in a way that you don’t need to be a climate scientist to understand.